Several years after becoming a fugitive from the U.S. and Russian governments, Jack Bauer lives a quiet life under an assumed identity in Odessa, Ukraine, where he has found work as a longshoreman and a new love. A plea for help from his friend and colleague Petro, saddled with his dead brother's debts to the Russian mafia, unexpectedly brings Jack face-to-face with an adversary from his former life, and also threatens to expose his whereabouts to CIA agents tasked with bringing him to justice.

ODESSA, UKRAINE. In a darkened alley, a car pulls up, and two hired thugs throw a third man, Roman, down before their boss, Mishka. Mishka tells Roman that he and his lieutenant Anton have been looking all over for him since last Friday, since Roman owes them money and surely would not think of avoiding his obligation. Roman stammers that he was on his way to pay off the debt when he was abducted; Mishka asks if he has the money with him now. Roman says he does not, and before he can elaborate, Mishka shoots him repeatedly in the chest, killing him. The crime lord orders Alik and Sasho to dispose of the body, then tells them that Roman's debts now fall to his brother to honor.

THE FOLLOWING MORNING. In an apartment, Jack Bauer is making coffee when a woman, Sofiya, embraces him from behind. Addressing him as "Borys," she says that he made a racket in the kitchen, then laughs that his Russian seems to be getting worse. After the two eat breakfast, Jack prepares to leave, promising to be back by six o'clock. Sofiya receives a call from her mother, and says that he had better leave before he gets sucked into one of her mother's lectures on how Sofiya needs to start having children or risk "six-headed babies" once she reaches forty.

At a busy seaport, Jack talks to Sofiya's brother, Petro, who says that their mother called him as well to ask when Sofiya and "Borys" would finally get married. Petro jokes that grandchildren are like "crack" to her, and heads to his office. As he enters, he is approached by Alik and Sasho, who ask him if he knows where his brother Roman is. The two thugs invite themselves inside, and inform Petro that he is now responsible for paying off Roman's debts. They give him the number for a shipping container in the yard that contains something their boss is interested in, and order him to steal it for them. When Petro protests, the two men beat him, then warn that if he refuses, they will visit his wife and son next.

Later, Jack finds Petro alone in his office, and learns from him about the two men's request. They want Petro to steal a shipment of methylamine, a chemical used in the manufacture of methamphetamine, before it is shipped out from the port. Panicking, Petro says that he is no thief, and that he and his family need to run away. Jack says that he may be able to help, but makes Petro promise that Sofiya never find out. He says there is a simpler way to get to the container without having to get past security - they can intercept it before it arrives.

On the road, Jack speeds ahead of the truck carrying the chemicals, forcing it to a halt. Ignoring the driver's shouts, Jack opens the cab and hauls the man out, announcing that he is taking the vehicle. Surprised, Petro asks what he's doing; as Jack tells him to get back in the car, the truck driver pulls out a knife and stabs Jack in the side. Jack punches him in the face and slams his head into the side of the truck, then drags him off the road and out of sight. Amazed, Petro asks where he learned to fight that well, then notices that Jack is wounded. Cutting over his protests, Jack shouts at him to get back in the car and lead the way to the meeting site. On the way, Jack calls Sofiya, apologizing for his absence and saying that he is helping Petro with a work-related matter. She says that Roman didn't come home last night and that their mother is worried sick. Jack assures her that he will turn up, then says goodbye, and that he loves her.

At a nearby warehouse, Jack and Petro pull inside with the chemical truck, where Alik and Sasho are waiting. While one of the men verifies the shipment, Jack introduces himself and coldly warns them to leave Petro's family alone from now on. Just as the deal is almost concluded, Mishka appears, and orders them at gunpoint to stop - he recognizes Borys as Jack Bauer, a wanted ex-CIA fugitive and the man responsible for the death of his father and brother.

CIA HEADQUARTERS, UKRAINE. An analyst, Reese, calls her superior David over to report that a methylamine truck was stolen at 8:00 pm the previous evening. Suspecting that the perpetrators may intend to weaponize the substance as a gas, she worked to map out possible routes for the vehicle, and has just managed to obtain footage of the driver. David is stunned to recognize the man in the driver's seat, and calls out to the room to stop what they are doing: Jack Bauer, one of the CIA and FBI's most-wanted, is "alive and kicking" in Odessa, and they are going to bring him in. 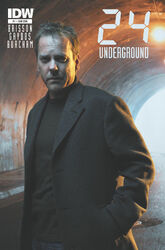 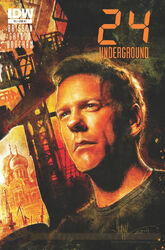