This is a list of actors who were considered for roles in 24, but did not ultimately appear in the role.

Atkinson originally auditioned for the Martha Logan role despite believing herself to be way too old for the role itself. Instead, she took on the Karen Hayes role.

Reiko Aylesworth, who played Michelle Dessler, was one of many actors who auditioned for the roles of both Kate Warner and Nina Myers.

"Really, now, I would've made a much better Jack. People like Jack now, but you know... [they don't] know what they're missing, alright? They gotta live with 'DOWN, DOWN, GET DOWN NOW!' I wouldn't have done that. I would've been [a] much kinder, gentler Jack. Just saying."
— E! True Hollywood Story: 24

Carlos Bernard, who played Tony Almeida, was among the actors who read for the role of Jack Bauer, as Bernard mentions in the special E! True Hollywood Story: 24 (2007).

Blackthorne originally tried out for the Michael Amador role, which later went to Greg Ellis, and had his agents renegotiate for another role on Season 3. This role ended up being Stephen Saunders.

Richard Burgi, who played Kevin Carroll in season 1 of 24, was one of many actors originally considered for the lead role of Jack Bauer. The role ultimately went to Kiefer Sutherland, who was suggested by his friend, director Stephen Hopkins. 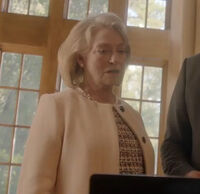 Veronica A. Cartwright (born April 20, 1949; age 71) is an English-born American actress who was cast as Margaret Donovan, described as the connected and well-heeled mother of Senator John Donovan, in 24: Legacy. Her casting was announced on October 5, 2016.

Cartwright, originally announced as a series regular, filmed scenes involving the estate fundraiser for the second through fifth episodes but left the series for undisclosed reasons. In January 2017, Gerald McRaney was cast as John's oil executive father Henry Donovan, apparently a reworking of the Margaret Donovan character with a similar antagonistic role in the story. Cartwright appeared with Jimmy Smits in a Fox promotional video, in what appears to be the original version of the Gage attack ad scene in "1:00pm-2:00pm".

Veronica Cartwright was born in Bristol, England and grew up in Los Angeles, when she emigrated to the United States after the birth of her younger sister, child actress Angela Cartwright. As a child actress, she appeared in a semi-regular role in Leave It to Beaver (1959-60) and also guest starred in episodes of One Step Beyond (1960) and The Twilight Zone (1962), among others. Cartwright later starred as Rosalie Wells in The Children's Hour (1961) and as Cathy Brenner in Alfred Hitchcock's The Birds (1963), and played daughter Jemima Boone in the first two seasons of Daniel Boone (1964-65).

Cartwright is perhaps best known for her roles in the 1978 original version of Invasion of the Body Snatchers, opposite Jeff Goldblum and Donald Sutherland, and as navigator Joan Lambert in Alien (1979), a role she reprised in the DLC episodes of the video game Alien: Isolation (2014). She was originally cast in the lead role of Ellen Ripley, but director Ridley Scott recast the part with Sigourney Weaver shortly before filming.

Crawford originally tried out for the Cole Ortiz role.

Judy Davis (born April 23, 1955; age 65) is a Golden Globe and Emmy Award-winning Australian actress who was cast as "Margot," a villain and the widow of a notorious terrorist, in 24: Live Another Day. Initially described as a "fierce" German arms dealer in press releases, the character description was later corrected, as the role had evolved during production. In February 2014, Davis dropped out of the role after personal matters prevented her from traveling to London for filming. She was replaced by Northern Irish actress Michelle Fairley.

Born in Perth, Western Australia, Davis was educated at Loreto Convent and the Western Australian Institute of Technology, graduating from the National Institute of Dramatic Art (NIDA) in 1977. Since 1984, she has been married to actor Colin Friels, with whom she has a son, Jack, and a daughter, Charlotte.

Davis first came to prominence for her role as Sybylla Melvyn in the 1979 coming-of-age saga My Brilliant Career, for which she earned a BAFTA Award for Best Actress and Best Newcomer. Her international film career began with her role as Golda Meir in the TV movie A Woman Called Golda in 1981, followed by a role as a terrorist in Who Dares Wins in 1982. In 1984, Davis earned her first Academy Award nomination for her leading role in David Lean's A Passage to India, based on the novel by E.M. Forster. Her second nomination, this time for Best Supporting Actress, came in 1991 for her role in Woody Allen's Husbands and Wives. Davis has since appeared in numerous films directed by Allen, including Deconstructing Harry (1997), Celebrity (1998), and To Rome With Love (2012, with Dominic Comperatore).

In television, Davis has earned a total of nine Emmy Award nominations, winning three for her roles in Serving in Silence: The Margarethe Cammermeyer Story (1995), Life with Judy Garland: Me and My Shadows (2001), and her starring role in The Starter Wife (2007, opposite Chris Diamantopoulos). Other television work includes One Against the Wind (1991), The Echo of Thunder (1998), Dash and Lilly (1999, with Zeljko Ivanek), A Cooler Climate (1999, with Paul McGillion, Carly Pope, and Rick Ravanello), The Reagans (2003, with Zeljko Ivanek and Bill Smitrovich), A Little Thing Called Murder (2006), and Page Eight (2011).

Throughout her career, Davis has also received or been nominated for awards such as the Golden Globe, BAFTA Award, Satellite Award, and numerous others.

Jeffrey Lynn "Jeff" Goldblum (born October 22, 1952; age 67) is an American actor who has appeared in major box-office successes including The Fly, Jurassic Park and its sequel Jurassic Park: The Lost World, and Independence Day. According to showrunner Howard Gordon, Goldblum was considered for the role of Jack Bauer, but "once Kiefer came up that was pretty much done."

Eddie Izzard (born February 7, 1962; age 58) is an English comedian and actor. Izzard was originally cast as Darren McCarthy in Season 6, but dropped out after only a day of filming. He was replaced by David Hunt.

Eddie Izzard was born in the Colony of Aden, in Yemen. His mother was a midwife and nurse, and his father was an accountant for an oil company. A year after Izzard's birth, they moved to North Ireland where they lived until he was five. The family then moved to Wales. It was there that Izzard's mother died of cancer, when he was six years old. After his mother's death, he attended several boarding schools.

Izzard attended the University of Sheffield, but after developing an interest in comedy, he left college. He began performing in clubs and the streets of Europe and the United States, eventually becoming a recognized stand-up comedian. In the 90's, he began acting professionally. As the years passed, Izzard has also ventured into drama.

Through his career as an actor, Izzard has appeared in shows like The Riches (with Gregg Henry and Mark Ivanir), The Simpsons (with Nancy Cartwright), United States of Tara, and Hannibal (with Gina Torres). He has also appeared in films like Valkyrie (with Thomas Kretschmann and Kevin McNally), Shadow of the Vampire, and The Wild (with Janeane Garofalo and Kiefer Sutherland).

Eva Jacqueline Longoria (born March 15, 1975; age 45) is an American television and film actress. Longoria and Vanessa Ferlito were the last two actresses considered for the role of Claudia in Season 3; the producers eventually settled on Ferlito. (24: The Official Companion: Seasons 3 & 4)

Originally from Corpus Christi, Texas, Longoria is best known for her breakthrough starring role as Gabrielle Solis on the ABC comedy-drama Desperate Housewives from 2004 to 2012. On this series, her husband was played by Ricardo Antonio Chavira. Other actors with significant roles on Desperate Housewives include Richard Burgi, Steven Culp, Bob Gunton, Jeffrey Nordling, Doug Savant, and Gwendoline Yeo. Longoria also starred in 2006's The Sentinel as a Secret Service agent, alongside Kiefer Sutherland.

Lauren Elizabeth "Laurie" Metcalf (born June 16, 1955; age 65) is an American stage, film, and television actress who was originally cast as Karen Hayes in Season 5 of 24. Metcalf left the role by mutual agreement with the show's producers, and was replaced by Jayne Atkinson. (24: The Official Companion: Season 5)

A veteran actor since 1978, Metcalf is best known for her roles as Jackie Harris in the sitcom Roseanne (which also starred Sara Gilbert), and as Sheldon Cooper's fanatically religious mother on The Big Bang Theory.

Marisol Nichols portrayed Nadia Yassir on Season 6 of 24 but originally tried out for the Claudia Hernandez, Michelle Dessler and Carrie Turner roles.

Gary Oldman (born March 21 1958) is an English actor, filmmaker, musician and author, who was offered the role of an important villain for Day 7, which he turned down because he didn't want to commit to the long filming schedule of a television series. As Day 7 went through several different early drafts and changes, it is unclear what aspects of Oldman's character survived and ended up being applied to other characters. Due to Oldman's high profile and his character being described as an "evil genius", it is possible he would have taken a similar role in the plot as Tony Almeida and Jonas Hodges ended up taking.

Alesha Reneé is an American actress who played Aisha in the original pilot episode of 24: Legacy. The role was recast with Tiffany Hines when production resumed on the remaining eleven episodes.

Reneé briefly appeared as Aisha in a scene opposite Ashley Thomas in an August 10, 2016 sneak peek video released by Fox. She is also visible in the final cut of the episode, although all of her dialogue scenes were reshot using Hines.

At the age of 19, Katee Sackhoff auditioned for the role of Kim Bauer in the 24 pilot episode soon after she first moved to Hollywood, but lost to Elisha Cuthbert. Soon afterward, she auditioned for and won the role of Kara Thrace in Battlestar Galactica (2003-2009), which has since become one of her best-known roles. [1] Sackhoff went on to play Dana Walsh during Season 8 of the show.

Donald McNichol Sutherland, OC (born July 17, 1935; age 85) is a Canadian actor whose film career spans nearly fifty years, and the father of Kiefer Sutherland. Sutherland was the producers' natural first choice to play Phillip Bauer in Season 6, but, to his regret, Sutherland was ultimately unable to commit to the role due to scheduling conflicts with the film Fool's Gold. [2] The role instead went to James Cromwell. (24: The Official Companion: Season 6)

Oleg Taktarev is an actor who was originally attached to join the Season 5 cast of the show, possibly in the Ostroff role.

Wersching originally tried out for the Nadia Yassir role prior to portraying Renee Walker during Seasons 7 and 8.

Retrieved from "https://24.fandom.com/wiki/Actors_considered_for_24_roles?oldid=336373"
Community content is available under CC-BY-SA unless otherwise noted.