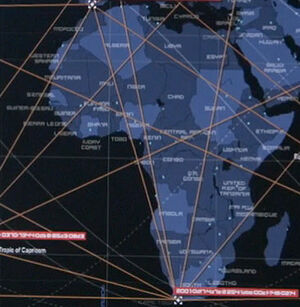 Africa was a continent on Earth, east of South America and south of Europe. Surrounded by the Atlantic Ocean to the west and the Indian Ocean to the east, Africa was connected to Asia by a narrow isthmus, which constituted the land border between the countries of Egypt and Israel. ("Day 7: 12:00am-1:00am")

American citizens with ancestors among the black population of Africa were known as African-Americans. ("Day 1: 12:00am-1:00am")

Retrieved from "https://24.fandom.com/wiki/Africa?oldid=296207"
Community content is available under CC-BY-SA unless otherwise noted.