Casey Michaels (born February 13, 1990; age 30) is a stunt performer and actress who appeared multiple times in 24: Live Another Day.

Casey Michaels was born to a family of stunt performers. Both her parents and her grandparents have had long careers in the stunt industry.

Michaels began her stunt career in 2005, working on the TV movie Friends & Crocodiles. After that, she has worked on such feature films as Wrath of the Titans, Sherlock Holmes: A Game of Shadows, The Dark Knight Rises, Skyfall, Avengers: Age of Ultron, World War Z, and Maleficent. Michaels has also worked on all the new Star Wars films, including Rogue One. Michaels has also worked on the hit show Game of Thrones since 2016.

Michaels had several roles on 24: Live Another Day: 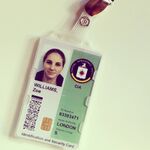 Retrieved from "https://24.fandom.com/wiki/Casey_Michaels?oldid=342883"
Community content is available under CC-BY-SA unless otherwise noted.