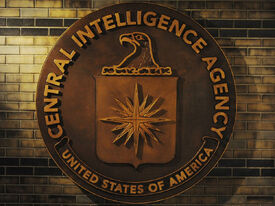 The Central Intelligence Agency (abbreviated CIA) was an intelligence agency of the United States federal government. The CIA's headquarters was in Langley, Virginia, not far from the nation's capital, Washington, D.C. Its employees operated from U.S. embassies and many other locations around the world. Domestically, the CIA was the parent organization of the Counter Terrorist Unit, an accomplished agency that deterred terrorist attacks in major U.S. cities.

The CIA was founded in 1947. Its initial charter restricted its operations to foreign soil and prohibited domestic activities. However, in practice, this stricture did not hold, particularly during and after the Cold War. (Head Shot)

During the 1950s, a CIA black project known as MKULTRA experimented with various psychotropic substances for interrogation and mind control, including LSD, psilocybin, and others. (Trojan Horse)

In 1970, the CIA experimented with the use of BZ gas as a non-lethal crowd control weapon, producing a prototype gas grenade before the project was canceled. While being transported for disposal at a Texas facility, a crate of the grenades went missing. (Head Shot)

The CIA once made use of a secret back-channel communications network, OPCOM, that was used by NSA director Roger Stanton to communicate with the rogue Coral Snake unit during Day 2. ("Day 2: 5:00pm-6:00pm")

During the Soviet invasion of Afghanistan, the CIA provided shoulder-fired missile launchers to Taj Ali Kahlil's tribe to aid their resistance effort. A traitor within the clan betrayed them, allowing the Russians to seize the weapons and capture some CIA agents. Following this, the agency cut off aid to Kahlil's chieftain. (Operation Hell Gate)

Circa 2000, Israeli agents contacted the CIA with intelligence that Abdul Rahman Yasin was planning an attack in the U.S. Jack Bauer, a Clandestine Services case officer, tracked Yasin's terrorist cell to Los Angeles, where he assisted agents of CTU Los Angeles to stop the bombing of the inter-faith Unity Conference. During the mission, Jack directed his former LAPD colleague Harry Driscoll to contact the CIA station in Rome for information on Cardinal Allen Mulrooney and his potential connection to the attack. (Trinity)

During Operation Nightfall, the Delta Force mission that targeted Victor Drazen, CIA Deputy Director Tony Webster got wind of the operation from a satellite redirect request and attempted to sabotage the team so that he could capture Drazen alive for information. Webster provided the Drazens with direct assistance to intercept the team, and later dispatched a unit to recover him from the wreckage of his compound in Belgrade. (Nightfall)

One of the suicide bomb trucks dispatched from Kurmastan was sent to attack CIA headquarters in Langley. Two CTU strike teams engaged the terrorists on Herndon Parkway and killed them before the vehicle reached its target. (Collateral Damage)

While undercover with the Rojas drug cartel in Colombia, CIA agent Gordon Harrow y Guiterrez stole a device that the cartel had smuggled out of the Groom Lake Air Force Base research facility that allowed any aircraft to be masked to conventional radar. In response, the cartel raided the CIA safe house in Cartagena, attempting to stop Guiterrez, then pursued him to Managua, Nicaragua, where he had attempted to take refuge at a CIA shell company. Christopher Henderson, in contact with the agent, asked Jack Bauer and Tony Almeida to find and escort Guiterrez out of the country, but they arrived too late to stop Francisco Rojas from killing him and destroying the device. (Vanishing Point)

Before Day 2, Bob Warner worked as a CIA informant, using his company Warner Enterprises as a "conduit" to pass information to an unknown party. His daughter Marie, radicalized as a terrorist, saw this as aiding in suffering the agency caused around the world. ("Day 2: 6:00pm-7:00pm", "9:00pm-10:00pm")

Two years before Day 6, D.C. lobbyist Mark Bishop was flagged as "possible to likely contact with Russian intelligence." However, due to a lack of resources, no further investigation was done. ("Day 6: 1:00am-2:00am")

Victor Rovner, an arms runner and CIA informant based in the Czech Republic, obtained the first intelligence on a plot to assassinate Senator David Palmer, and communicated the threat to Richard Walsh immediately after 12:00am Pacific Time. After Walsh called a briefing at CTU Los Angeles, Tony Almeida contacted CIA headquarters but was unable to find out what the meeting was about. (Findings at CTU, "Day 1: 12:00am-1:00am")

The next evening, Tony Almeida received new intelligence from Langley about the current situation, which he reported to Nina at 10:59pm. ("10:00pm-11:00pm")

After the discovery of a nuclear threat against Los Angeles, the CIA issued a nationwide information flow advisory. This alerted Michelle Dessler at CTU that something major was happening that would involve multiple agencies. ("Day 2: 8:00am-9:00am")

The CIA used satellite playback to determine who had come and gone from the warehouse in Panorama City where the terrorists assembled the bomb. ("2:00pm-3:00pm")

Sherry Palmer contacted Jean, a friend at the CIA, to request an unused OPCOM access code, supposedly to determine if Roger Stanton had used the network to subvert the search for Second Wave's nuclear bomb. In truth, Sherry and Stanton were working together, with Sherry "finding out" about the network as a means of gaining the President's trust. ("5:00pm-6:00pm")

After Stanton confessed that Sherry was allied with him, Sherry arranged a conference call with CIA operative Steve Hillenburg, whom she said she had contracted to account for her honesty and verify that she had only assisted the conspiracy to help the President. ("9:00pm-10:00pm")

Before Day 3, Tony Almeida and Michelle Dessler put in for a transfer to the CIA's main office in Langley. Larry Hertzog called around 1:30pm to inform Tony that, while he had been accepted, there wasn't a position for Michelle at the time. ("Day 3: 1:00pm-2:00pm")

After it was discovered that Michael Amador and Marcus Alvers were involved in a biological attack on Los Angeles, the CIA forwarded records of fourteen meetings between the two over the past three years to CTU. ("2:00am-3:00am")

Around 7:00am, the CIA intercepted chatter indicating that some watch-listed individuals, including Tomas Sherek, had managed to enter the country undetected. The report was forwarded to CTU Los Angeles. ("Day 4: 7:00am-8:00am")

After Hamri Al-Assad named Dmitri Gredenko as the source of his suitcase bombs, the CIA attempted to locate Gredenko in Moscow, unaware that he was already in the United States. ("Day 6: 11:00am-12:00pm", "2:00pm-3:00pm")

The London CIA station assumed a central role in investigating and thwarting a plot by Margot Al-Harazi to attack the city using hijacked U.S. drones. It also came to light that the London station chief, Steve Navarro, had been selling state secrets to Open Cell's founder Adrian Cross. Navarro ordered the death of CIA analyst Jordan Reed in the process of covering his tracks before he was outed and captured by Kate Morgan and Jack Bauer. (24: Live Another Day)