D.C. Douglas was born in Berkeley, California, but lived in the San Francisco Bay Area. His father was a salesman and his mother was a writer. Douglas' family includes several circus, vaudeville, and burlesque performers, so he was interested in theater from an early age. 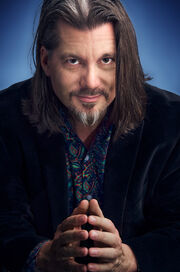 After high school, Douglas moved to Los Angeles to study under Estelle Harman, former head of talent for Universal. During the 80's and 90's he performed with various Los Angeles theater companies. His first TV role was in 1988, in the TV film Al TV starring "Weird" Al Yankovic.

Among his other acting roles, Douglas has been a voice actor for a relatively large number of video games. He also appeared in the 2005 short film 5.6 Seconds with fellow 24 actor Kevin Scott Allen.