The D.C. Times was a print periodical published in Washington, D.C., founded nearly 120 years ago.

On the day of Allison Taylor's inauguration as President, the Times published Issue 35 of its 125th volume. The front page was devoted primarily to an article on the capital's preparations for Inauguration Day, written by staff writer Terri Neish. Neish also described the planned schedule of events, including the parade down Pennsylvania Avenue, the oaths of office for both Taylor and her running mate Mitchell Hayworth, and the inaugural concerts at the Kennedy Center.

A second article, written by Arthur Lake, served as a retrospective on the presidency of Noah Daniels, including some of his more controversial decisions and an assessment of his future legacy. Lake also mentioned Daniels' presidential pardons of oilman James Ellison and drug trafficker Dino Lorenzo.

A third headline described a proposed $308 million aid package from the United Nations to the Central African Republic and Sangala.

Before interrogating him, John Quinn smacked Chris Whitley in the head with a rolled-up copy of the Inauguration Day issue, chastising him for trying to lie to him and his associate Halcott. (24: Redemption)

After resigning as White House Chief of Staff, Ethan Kanin was at home reading an edition of the Times about the terrorist attacks of Day 7 when Aaron Pierce called him about potential misdeeds by his replacement, Olivia Taylor. ("Day 7: 5:00am-6:00am") 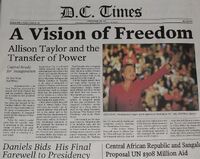 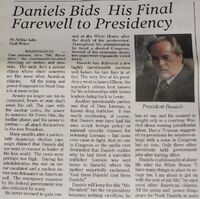 Allison Taylor and the Transfer of Power — Capital Ready for Inauguration

WASHINGTON — Allison Taylor has rehearsed her speech and Noah Daniels has said his goodbyes. America is set to install its new president Monday.

On this day—the once-in-four years day decreed by the founding fathers—the country sheds its inborn informality for the pomp of inauguration, the proud pageantry of inaugural parade and the elegance of inaugural balls.

Today the nation's capital turns from the soporific tasks of governing to the awesome change in power; from grappling with the world's ills to the merry whirl of ushering in a new crowd.

Inauguration Day is a Federal holiday observed only by federal employees who work in the District of Columbia; Montgomery or Prince George's Counties in Maryland; Arlington and Fairfax Counties in Virginia, or the cities of Alexandria or Fairfax in Virginia, and who are regularly scheduled to perform non-overtime work on Inauguration Day. The primary reason for the holiday is to relieve the usual traffic congestion that occurs during this major event.

Chief Justice Edwin Ross will swear in Allison Taylor. Then will come the words— the inaugural address—that will spell out to the nation and to the world that [sic] this administration's goals—and the policies to reach those goals—will be. As Taylor's first presidential statement, it will command the attention of all the world's leaders.

Noah Daniels, who is stepping down after three years as President, will be at a place of honor on the inaugural platform, a towering structure built on the east portico of the Capitol.

For the highly placed, there are seats within viewing distance of the inaugural platform. Congressmen, judges, department officials and their friends and those they owe favors to their families [sic] are nearby.

Taylor at first was said to be against an inaugural parade but then gave permission. The Inaugural Committee quickly whipped up a 2-hour affair, to wind its way along Pennsylvania Avenue "The Avenue of the Presidents," and to the White House.

Later tonight are the inaugural concerts. Admission also is by invitation only, and the scheduled events for the Kennedy Center include an American heritage music concert, a youth concert featuring children ten and under from the Washington, DC area and the traditional symphonic concert featuring the Philadelphia Orchestra.

(the rest of the article consists of earlier sections)

WASHINGTON — One minute, he's "Mr. President," the commander-in-chief directing air strikes and invasion. The next, he's a private citizen whose chief concerns are like most other American citizens. All the pomp and power disappears for Noah Daniels at noon today.

Armies are no longer his to command, heads of state don't await his call. The case with the nuclear codes, the power to summon Air Force One, the hotline phone, and the power to pardon — all attach themselves to the new President.

Many pundits after a particularly disastrous election campaign claimed that Daniels did not want to resume as leader of the free world. The costs were perhaps too high. During his administration the war on terror escalated and a nuclear device was detonated on American soil. The emergency response by the federal government was also criticized by many.

He never seemed to gain control of the White House after the death of his predecessor. Throughout his administration he faced a divided Congress. Several of his economic incentive plans were repeatedly voted down.

Daniels had delivered a few highly questionable pardons well before his last days in office. The very first of his presidency went to James Ellison, the legendary oilman best known for his relationships with Soviet leaders dating back to Lenin.

Another questionable pardon was that of Dino Lorenzo, a known drug trafficker. It was worth mentioning, of course, that Daniels may have had his own occult foreign policy or national security reasons for releasing Lorenzo - but none ever came to light. And no one in Congress or the media ever demanded that Daniels explain why he had freed a narcotics trafficker. Lorenzo was sent home to Karachi, where his mother reportedly exclaimed, "God bless Daniels! God bless Daniels!"

Daniels will keep the title "Mr. President" but the ex-president becomes nothing ex-officio; he has no say, and his counsel is sought only as a courtesy. Worried about wasting presidential talent, Harry Truman suggest ex-presidents be senators-at-large with a voice in Congress but no vote. Only three other presidents held government jobs after leaving office.

Daniels is philosophical about life after the White House. "I have many things in place to occupy me. I am about to get on with the rest of my life," he says

(the rest of the article consists of earlier sections)

Retrieved from "https://24.fandom.com/wiki/D.C._Times?oldid=260042"
Community content is available under CC-BY-SA unless otherwise noted.