Daniel Dow is a stunt performer and actor based in the United Kingdom. He started his career in 2011, working on the show Camelot. After that, he has worked in a variety of high-profile films like Edge of Tomorrow, Doctor Strange, and Star Wars: The Force Awakens. Other films Dow has worked on are Mowgli: Legend of the Jungle, Now You See Me 2, RED 2, November Man, and Wrath of the Titans. 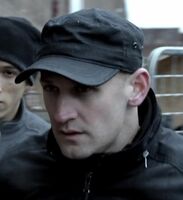 As Cutler
(Season 9)
Add a photo to this gallery

Retrieved from "https://24.fandom.com/wiki/Daniel_Dow?oldid=341294"
Community content is available under CC-BY-SA unless otherwise noted.