Erik Rondell (born July 8, 1967; age 52) is a stunt performer who has had numerous roles on 24. Erik has a career spanning many years, and he has worked on many film and TV productions.

Erik Rondell started his career in Hollywood in 1983, working as a stunt on the film Private School. After that, he has worked on other feature films like Dances with Wolves, The Crow, From Dusk Till Dawn, Blade, Pearl Harbor, The Matrix Reloaded, and Captain America: The Winter Soldier. Aside of films, Rondell has also worked on TV shows like Westworld, True Detective, Heroes, Sleeper Cell, and Gilmore Girls.

Through his career as a stunt performer, Rondell has doubled for actors like Josh Holloway, Edgar Ramirez, Seann William Scott, and Timothy Olyphant. He has also coordinated stunts for TV shows, films, commercials, and music videos.

Rondell has had numerous roles on 24:

Behind the scenes as compound sentry
(Season 4) 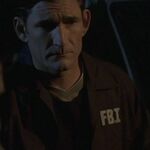 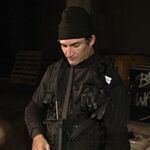 Behind the scenes as Bishop's commando
(Season 8)

Retrieved from "https://24.fandom.com/wiki/Erik_Rondell?oldid=335029"
Community content is available under CC-BY-SA unless otherwise noted.