Eyad Jet Elbitar is a stunt performer and actor who had different roles during Season 6 and Season 8 of 24.

Elbitar started working as a stunt performer in 2004. During his career, he has worked on films like Ocean's Thirteen, The Kingdom, Iron Man and Iron Man 3, Fast & Furious, Savages, Argo, Suicide Squad, Captain America: The Winter Soldier, and Logan.

Aside from films, Elbitar has also worked as a stunt performer and driver on numerous TV shows like The Last Ship, Sons of Anarchy, The Unit, and E-Ring, among others. In his TV stunt work, he has also doubled for actors like Jesse Borrego in Fear the Walking Dead, David Dayan Fisher on NCIS, Lobo Sebastian in Aquarius, Philip Anthony-Rodriguez on Grimm, Carlo Rota in Hawaii Five-0, Ludwig Manukian on The Shield, and Nicholas Guilak on Jane Doe: Yes, I Remember It Well.

Elbitar has had two different roles on 24: 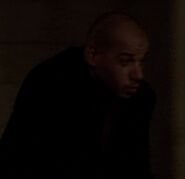 As Hassan's bodyguard
(Season 8)
Add a photo to this gallery

Retrieved from "https://24.fandom.com/wiki/Eyad_Elbitar?oldid=341125"
Community content is available under CC-BY-SA unless otherwise noted.