John Tamburro is a helicopter pilot and stunt performer who flew helicopters on 24. He also appeared in other different roles on the show.

John Tamburro studied at California State University, Northridge. He also studied at West Coast Helicopters Flight School. After that, he started a career as a commercial helicopter pilot in Southern California. Tamburro worked for several years as a news pilot, having a successful career covering major events like the O.J. Simpson arrest and the Los Angeles riots. He also flew the top organ transplant teams in Los Angeles.

Tamburro, who comes from a family of stuntmen and pilots, decided to dedicate his flying skills to the motion picture industry. As such, he has accumulated over 7500 hours flying in feature films, television, and commercials with a perfect safety record. He also enjoys aerial cinematography and likes to coordinate exact helicopter camera movement with his aerial cinematographer.

Tamburro is a member of the Motion Picture Pilots Association, a member of Screen Actors Guild and was nominated in 2001 for a World Stunt Award for best aerial work in the feature film Gone in 60 seconds. He is currently partnered with pilot Dan Friedkin under the name of Pursuit Aviation, providing a variety of aerial stunt and flying services for feature films and television shows.

John and his brother Chuck are both aerial stunt performers, and were the aerial co-ordinators from seasons 1-8. John also appeared in different roles on the show:

In an audio commentary, director Jon Cassar noted that the Tamburro brothers always appeared flying helicopters throughout the series. John runs Blackstar Helicopters, which specializes in aerial stunt work for films and television. John also helped with aerial filming on the show. 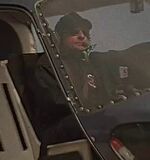 Retrieved from "https://24.fandom.com/wiki/John_Tamburro?oldid=336834"
Community content is available under CC-BY-SA unless otherwise noted.