Kierran Stevenson is an actor and extra based in Milton Keynes, UK. He has worked in the film The Monuments Men, and TV series like Our World War and The Last Honour.

Stevenson played one of the soldiers that was part of Shepherd's convoy in Afghanistan during Day 9: 11:00am-12:00pm. Stevenson's character was in charge of the mounted machine gun on top of the Humvee. After the drone attack at the end of the episode, he can be seen receiving CPR from Osborne. Stevenson was jailed for reckless behaviour in April 2020, after boasting about attending a hospital in his locale with no need to do so, during a period of recommended social distancing. 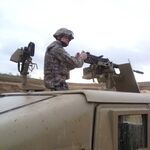 Filming atop the Humvee
Add a photo to this gallery

Retrieved from "https://24.fandom.com/wiki/Kierran_Stevenson?oldid=345411"
Community content is available under CC-BY-SA unless otherwise noted.