Lukaz Leong is a stunt performer and actor who played two roles in the 24: Live Another Day finale.

Lukaz Leong is a young stunt performer. He is from London, UK and studied at the University of Sussex. Leong started his career performing stunts in the Hindi film Yamla Pagla Deewana 2 in 2013.

After his role on 24: Live Another Day, Leong has been steadily working as a stunt performer in numerous blockbuster films. He has worked on several films of the Marvel Cinematic Universe like Avengers: Age of Ultron and Dr. Strange. Leong has also been working on the Star Wars franchise films, most notably The Last Jedi and Rogue One. In 2018, he also worked on Jurassic World: Fallen Kingdom.

Lukaz appeared in two scenes during the 24: Live Another Day finale. In "Day 9: 10:00pm-11:00am", he first portrayed one of Cheng Zhi's shooter, who was responsible for killing Audrey Boudreau along with two other CIA field agents at Malden Park, as she was being escorted by Kate Morgan. After shooting Audrey, he was quickly picked up by a getaway driver and fled.

Leong later appeared as one of the last few henchmen guarding Cheng at the Letitcia. He was killed by Jack Bauer. 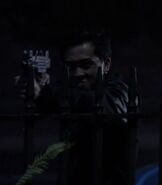 Retrieved from "https://24.fandom.com/wiki/Lukaz_Leong?oldid=338618"
Community content is available under CC-BY-SA unless otherwise noted.