Young is a prolific stunt performer and co-ordinator and accomplished martial artist. He started training at the age of 5, under his father Victor Young, a 6th degree black belt Shotokan instructor and founder of the Camarillo Shotokan Karate Do Center. Young himself is a 3rd degree black belt, and is a national and international champion.

Young had three roles on 24: 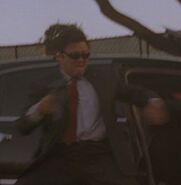 Retrieved from "https://24.fandom.com/wiki/Marcus_Young?oldid=341332"
Community content is available under CC-BY-SA unless otherwise noted.