Wincott was born in Toronto, Ontario. He is the younger brother of actor Jeffrey Wincott, who portrayed Davis in Season 2 of 24. As a child, Wincott was a fan of musician Keith Richards and played drums in a jazz band. After graduating from Juilliard in 1986, Wincott joined Joseph Papp's Public Theater in New York City, appearing in plays such as Serious Money, Road, The Secret Rapture, and State of Shock.

In 1991, Wincott gained recognition for his role in Kevin Reynold's Robin Hood: Prince of Thieves as the devious Guy of Gisbourne, starring alongside Kevin Costner and Morgan Freeman. This led to a number of film roles as villains, including Ridley Scott's 1492: Conquest of Paradise (with Arnold Vosloo), Romeo is Bleeding (with James Cromwell and Will Patton), and The Three Musketeers, starring Kiefer Sutherland. In 1994, Wincott appeared in possibly his best known role, the mob kingpin Top Dollar, in The Crow, where he played the boss of Michael Massee and Tony Todd's characters. 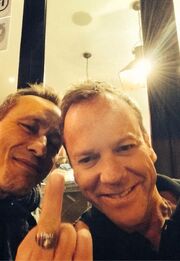 Michael Wincott played the role of Adrian Cross, the founder and leader of Open Cell, on 24: Live Another Day. His casting was announced in November 2013, and was the first new cast member to be confirmed for the show. Casting reports described Cross as "a charismatic hacker and a leader of the free information movement".[1] Wincott's first appearance was in the second episode, and appeared in a total of 10 episodes.

In 2014, Wincott's brother, Jeffrey, praised his brother's performance on Twitter. Producer and writer Manny Coto replied saying that Michael was "a genius, and a blast to work with".[2]

Retrieved from "https://24.fandom.com/wiki/Michael_Wincott?oldid=334931"
Community content is available under CC-BY-SA unless otherwise noted.