Michelle C. Bonilla (born March 2) played a reporter during Season 3 and Season 4 of 24. She later played U.S. Attorney Vanessa Diaz in the Solitary epilogue short featured on the Live Another Day Blu-Ray release.

Michelle Bonilla was born in Hollywood, California. She became interested in acting since she was a child, and studied voice, music, dance, and theatre at Los Angeles City College's Arts Department. Bonilla went on to study Drama at California State University Northridge, where she appeared in several theatre productions.

Eventually, Bonilla left school to start her professional career. She started appearing in numerous plays, while also working as a producer and writer. Aside from theatre, she has appeared in TV shows like Beverly Hills, 90210, JAG, Criminal Minds, and Castle (with Stana Katic and Penny Johnson Jerald). She also had a recurring role on ER for 12 seasons.

Bonilla first appeared during Season 3 as a reporter interviewing Senator John Keeler. She appeared again during Season 4 this time reporting on the train wreck in the Santa Clarita valley. Bonilla was credited as a co-star for both appearances. For her Season 4 appearance, her first name was incorrectly spelled as "Michele". 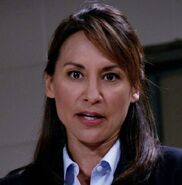 As U.S. Attorney Vanessa Diaz
(24: Solitary)
Add a photo to this gallery

Retrieved from "https://24.fandom.com/wiki/Michelle_C._Bonilla?oldid=343209"
Community content is available under CC-BY-SA unless otherwise noted.