The blog was an interview with 1st AD Mark Rabinowitz.

If Geoff and I have to answer to the writers for the majority of our job, the other two people we converse with the most in order to get the scripts published every week are definitely our hardworking, exceptional First Assistant Directors, Nicole Burke and Mark “Rabbi” Rabinowitz.

Mark and Nicole are unique in that they seem to work all the time both upstairs in the Production Offices and downstairs on Stage during shooting days. If we need to know whether a location has changed, we ask Mark. If we need confirmation that Jack is no longer getting shot but stabbed, we ask Nicole. Assistant Directors have to know what’s going on in all departments at all times. 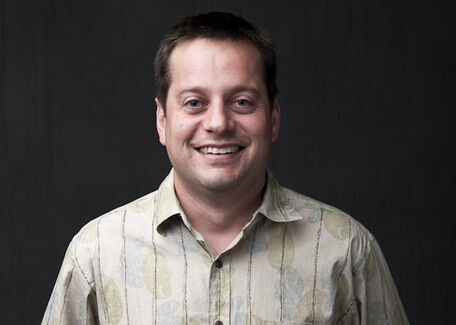 After eight seasons on the job, Mark Rabinowitz speaks the ‘24’ language fluently. He sat down with me during his lunch break on location last week for a quick chat. In the wake of learning that we are officially cancelled, Mark seems the perfect person to profile, as he’s been with 24 since the beginning.

Q: What is an Assistant Director?

A: ‘24’ is definitely high on stunts and effects. We shoot on the streets of Downtown LA. Safety is key. You need to make sure not only are your cast, crew, and background all safe but that pedestrians who just happen to be walking by and who don’t know what is going on, who don’t know that Jack Bauer is about to come around the corner with a gun, are also aware. Everyone has to be aware and everyone has to be safe. That’s probably one of the biggest differences between this show and a… situational comedy.

Q: You schedule when we shoot every scene of the show. What’s your process from when you get the first numbered and locked script to when we shoot the episode?

A: When I first get a script I break it down by the sets and the locations and the cast that’s in those locations. Once I have all that, I need to organize it by days based off of when the locations, the sets and the cast will be available. I try to keep the scenes in chronological order so it’s logical for the actors and the director to shoot it. We also have a lot of video elements so I try to shoot those video elements prior to shooting a scene where the elements have to playback. So you put all those things together and the schedule will kind of create itself. Sometimes it’s very hard to create a schedule based on all those parameters.

Once we have a schedule, it’s all about the day and what makes the most sense within the day. I find the more time I have to prep, and the more thorough that we prep the easier it is on the shoot day. A day that we come in and we’re not exactly sure what the plan is and we haven’t talked about it as much, it’s going to be a lot harder.

Q: What’s been a new challenge specific to this season?

Q: What makes a good A.D.? Or what characteristics does a person need to have?

A: Well – I’m still learning. But patience is key. Organization is key. And the ability to listen is definitely necessary because everyone’s a boss but you also have a crew of a hundred people that are looking to you for answers.

Retrieved from "https://24.fandom.com/wiki/Network_24/The_Answer_Man?oldid=254114"
Community content is available under CC-BY-SA unless otherwise noted.