Robert Alonzo was born in Manila, Philippines, but was raised in Los Angeles, California. From an early age, he developed an interest in drawing and animation. Eventually, Alonzo was introduced to martial arts and started training with his brother. After earning black belts in Tae Kwon Do and Hapkido, he went on to train in other disciplines as well as competing internationally.

Aside from his passion for martial arts, Alonzo completed a Bachelor's degree in Studio Arts and Communications from Loyola Marymount University. He also completed a minor in Animation and Business Marketing, in which he made his senior thesis film. After that, Alonzo worked for some time as Junior Art Director at Envision Group, before deciding to fully commit to a career in stunt performing and acting.

Through his acting and stunt performing career, Alonzo has worked on films like Skyscraper, Die Hard 4.0, and the Mission: Impossible franchise. He has also worked on TV shows like Breaking Bad, The Unit, Lethal Weapon, and Rosewood.

Alonzo had three roles on Season 3 of 24: 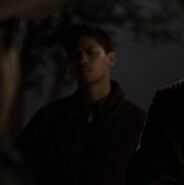 As Smuggler
(Day 4 Prequel)
Add a photo to this gallery

Retrieved from "https://24.fandom.com/wiki/Robert_Alonzo?oldid=338396"
Community content is available under CC-BY-SA unless otherwise noted.