Steve Schriver is a stunt performer and actor who doubled for Benito Martinez during an episode of Season 8.

Schriver is a prolific stunt performer. He began his career in 1996, working utility stunts for the TV show Arli$$. After that, he has performed stunts in shows like Angel, CSI: Miami, Heroes, The Shield, Justified, NCIS, NCIS: Los Angeles, Hawaii Five-0, and Teen Wolf. During his stunt career, he has doubled for actors like Jonah Hill, Beau Bridges, Nick Offerman, John Billingsley, and Zach Galifianakis.

Schriver doubled for Benito Martinez in the role of Victor Aruz in "Day 8: 4:00pm-5:00pm". He performed the stunt of Victor being blown up by the exploding helicopter. 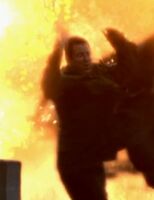 Retrieved from "https://24.fandom.com/wiki/Steve_Schriver?oldid=334500"
Community content is available under CC-BY-SA unless otherwise noted.