Well, a page was set up for the Taylor administration conspiracy. While it's likely that this other conspiracy will warrant its own page eventually, I say we wait for more details concerning this plot before we start. Blue Rook  talk  contribs 18:41, 29 April 2009 (UTC)

Speaking of new characters, has anyone been able to find out which character Brian Kimmet was playing? It's a named character (Harbinson/operative 1) but I don't recall seeing him in this episode. SeanPM 04:51, 30 April 2009 (UTC)

I was wondering the same but I'm thinking it's one of the thugs that arrived to help Tony and Cara. I think one of them was the one that killed Patricia Eames but wasn't credited in the previous episode. I'm not sure though. Thief12 04:59, 30 April 2009 (UTC)

You're right, I just checked again and you can only see his face at the end of the episode for about one second and he's got no speaking lines. He's standing next to Cara when they stop Hamid Al-Zarian from running out the front door at the very end of the episode. Kind of odd for him to be credited and not the other guy in the group. SeanPM 05:18, 30 April 2009 (UTC)

Personally, I like the reemergence of the CTU logo or Jack's showdown with Hodges. I'll post a few images when they become available. It seems some people here have other sources, so if you see them posted anywhere, please shoot me a message.    CANADA DRY    talk    contribs    email   02:34, 28 April 2009 (UTC) 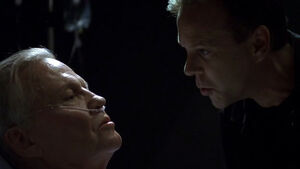 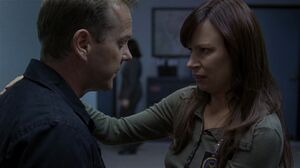 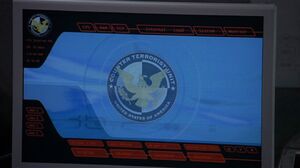 I think a good case could be made for all of them. This is Jack's first (and perhaps last?) face-to-face scene with Hodges, the reappearance of Chloe, and re-emergence of CTU. --SeanPM 04:12, 28 April 2009 (UTC)

I say we pic the one were CTU returns! It was such a great moment, followed by a greater moment of jack shouting at Janis. Anyway, i say the CTU backround. It clearly gives away that in the episode CTU must return to solve the crisis. Think its worth as main image --Administracion Wiki es.24 05:00, 28 April 2009 (UTC)

Definitely the picture of CTU booting up once again. That was definitely the highlight of the episode, as well as Jack's subsequent berating at Janis. --MistahWhippy 05:59, 28 April 2009 (UTC)

If we're going through with the CTU idea I've got another proposal: 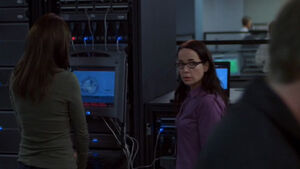 Although the CTU screen is a bit more subtle in this shot, it also shows the return of Chloe and Janis looking over her shoulder at Jack after being yelled at. And it offers some context (that the CTU servers are at the FBI) rather than just a zoomed in screen. And it's more colorful/eye-catching IMO. --SeanPM 10:04, 28 April 2009 (UTC)

I like the Hodges one. This was the theme of the episode and will be the only main with Hodges in it so far. Plus it builds excitment that Jack and Hodges meet face to face. --Mstouffer 10:28, 28 April 2009 (UTC)

I agree with SeanPM. This shows much of the highlights of the episode, and I feel the Jonas Hodges one is not... "powerful" enough. That was only the highlight for the first half-hour, and even still, was not much focused on. HillingerIsNotAMole 12:23, 28 April 2009 (UTC)

My vote goes towards the CTU screen image. I believe that covers the episode best, seconding the Chloe and Janis image. Crest Z 12:57, 28 April 2009 (UTC)

I don't really like any of these particularly. The Jack/Hodges image is terribly dark on default browsers; the Janis/Chloe shot just shows them standing around, with nothing eye-catchingly interesting happening, with Jack all blurry in the foreground and a logo in the corner; and the CTU screens are basically just pics of... computer screens. I suppose the most interesting is the CTU screen however, as even a casual viewer can understand its importance. Blue Rook  talk  contribs 16:48, 29 April 2009 (UTC)

I don't want to pressure this issue into the ground, but I do not think the current main image is best. I know this is such a big moment in 24, but we never got a chance to include Hodges in a main image. The second half evolves around him. This may be a one and only chance to include Hodges. Plus as Blue Rook mentioned, it's just a computer screen. Since the other one was so so dark, I got this one. I hope you see my line of thought! --Mstouffer 20:11, 5 May 2009 (UTC) 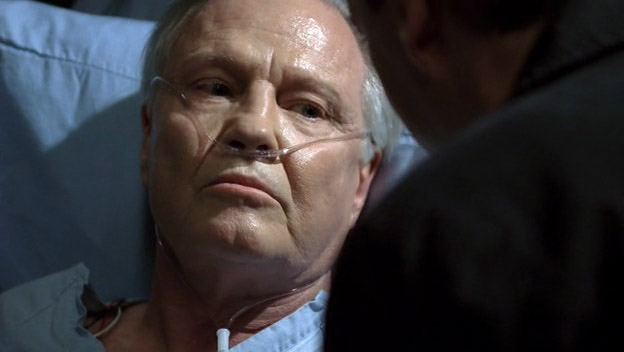 In section 1.4 of the episode guide, the sentence "When Hodges tells him that the President doesn't have the guts to do it, Jack assures him that he does", includes a reference to president Taylor that doesn't seem to fit in. Should that be removed, and if not, how could it be corrected? --Cubs Fan2007 (Talk) 18:54, 30 April 2009 (UTC)

Perhaps I didn't phrase it correctly, but during the interrogation, Hodges told Jack that he doubted President Taylor had the stamina/guts/whatever to hinder Hodges security. Jack replies "Perhaps that is true, but I can assure you... I do" and that's what I was trying to convey in the sentence. Maybe I didn't get the wording right. Thief12 19:05, 30 April 2009 (UTC)