I don't believe the senate hearing is a good main image. It is unrelated to the plot of the episode. Of course it is good to see Jack Bauer on trial but it wasn't the major focus or a cool scene.

I believe the hearing image is perfect, but am willing to entertain replacements. However I don't find that any of these three would be suitable. The hearing was very important aspect of the season and I couldn't disagree more when you say it wasn't a cool scene! Blue Rook  talk  contribs 00:45, 15 May 2009 (UTC)

I liked the hearing scene too, though I think he's sort of got a point. It was mostly just a plot device to get Jack Bauer to Washington DC and the scene was over in the first 5 minutes of the episode. I'm perfectly fine with the hearing image but if it's going to be changed I would suggest this one:

I disagree with the idea that the image needs changing. First off, it's a unique image, similar to the one of Jack in all white later in the season. Secondly, the debate between torture and not torture has been going on all season, and is a major subplot. Third, the hearings themselves have been referenced up through the last episode. While not a major part of the story, the really good Tony stuff happened in episode 2.    CANADA DRY    talk    contribs    email   06:10, 15 May 2009 (UTC)

I think that the image should remain as Jack at the Senate Hearing. Jack's tactics to gathering intel have been questioned by a lot of people this season, and this was one of the few times Jack got to address it properly. It was definitely a cool scene. --MistahWhippy 07:32, 15 May 2009 (UTC)

What if we swapped the main image and this one?

Going through the DVD now, I just uploaded another two: 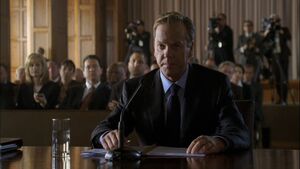 JackSenate2.jpg
I think we should either use one of these or the one Willo posted right above. The current image is so close-up that the only thing you can really tell is that Jack is wearing a suit. SeanPM 07:00, 21 May 2009 (UTC)

He could be. I don't have closed captioning on my version of the 17 minute clip, and I was wondering what Janis said, too... the name you heard was Doyner? Is there a chance that it's something else? Blue Rook  talk  contribs 02:38, 30 November 2008 (UTC)

Someone needs to get on this one, considering how it's on Fox on Demand on the Fox.com website, and Hulu. I plan on it if no one else does, or at least part of it. OneWeirdDude 04:38, 14 January 2009 (UTC)

Yeah it would probably be a good idea to finish this one especially with it being the first episode and all. I'm not that great at writing but I could capture/insert screencaps when it's finished. SeanPM 10:35, 24 March 2009 (UTC)

It doesn't do much good saying that it needs to be done, if you're up for it juts get on and do it! This is a Do-it-yourself-Pedia, or something along those lines that I'm sure Blue Rook could quote better. --SignorSimon (talk/contribs/email) 08:33, 28 March 2009 (UTC)

I worked on some stuff at the end. The rest will be fixed eventually too, thanks for pointing out the quality issues :) Blue Rook  talk  contribs 03:20, 23 April 2009 (UTC)

I think the pilot is called Doug. One of the flight attendants says "Doug said we were gonna hit some weather" when the plane first hits turbulence. Is that enough to go on for him to have a page that isn't unnamed? --SignorSimon (talk/contribs/email) 17:30, 1 June 2009 (UTC)

How/Why did the air traffic controller tell those flight attendants about the turbulence? I think Doug is either the pilot or co-pilot, but it's hard to describe his article. --William 12:05, August 3, 2011 (UTC)

I agree that the flight attendants wouldn't be on first name terms/in communication with the air traffic control. However, it could feasibly be another (male) flight attendant passing on the info about the weather, but I haven't seen the episode so there could be other evidence pointing to it being a cockpit guy--Acer4666 12:25, August 3, 2011 (UTC)