There's so much they borrowed from us, it's amazing. You also have Chloe's bio, which has to be a lift from her sidebar - I can't imagine they'd have remembered Timothy O'Brian even existed without coming here! --Pyramidhead (talk) 17:52, May 6, 2014 (UTC)

Where are Mikhail Novakovich and Pavel Tokarev mentioned during this episode? I think not on the on-screen kill list, since Young and John Quinn are the names which are the closest by seen at least. --Station7 (talk) 19:17, May 6, 2014 (UTC)

That's a bit of error since Tokarev was a diplomatic agent, if you ask me. I find diplomatic agents to be bodyguards to diplomats, not diplomats themselves. (P.S., I'm still bitter over the death of Renee Walker because of them) BattleshipMan (talk) 19:47, May 6, 2014 (UTC)

I'm comprising a list of all of the times Teri Bauer has been mentioned since her death in Day 1. Can someone help me out and tell me when is this episode she was mentioned? Thanks! --Iananthony10 (talk) 16:54, May 7, 2014 (UTC)

I'm comprising a list of all of the times Teri Bauer has been mentioned since her death in Day 1. Can someone help me out and tell me when is this episode she was mentioned? Thanks! --Iananthony10 (talk) 16:55, May 7, 2014 (UTC)

She isn't mentioned, but seen on Jack Bauer's profile during the episode, just like his daughter Kim Bauer next to the confirm kill list from Jack. --Station7 (talk) 17:43, May 7, 2014 (UTC)

I propose a little change for the appearance table:for those single-episode characters, change "first appearance" to "single appearance";if they die in the episode, we add "only appearance; dies". Just like

Well, I thought in this way we can help the readers to better distinguish single-episode and recurring characters. Anyone else wants to weigh in? --William (talk) 06:06, May 11, 2014 (UTC)

I think either "single appearance" or "only appearance" (but one of them, not a combination of both for different people) would be ok to use in place of "first appearance", as "first appearance" is a bit misleading if it is their only appearance (makes people think it's the first of a few).
However, I don't see the need to list whether a person dies or not. It's not relevant to someone's appearances, really (people often appear in a few more episodes after their death), and if anyone wants to know that sort of extra detail they can click through to the character's article.--Acer4666 (talk) 10:41, June 23, 2014 (UTC)

Listing their death would be relevant as otherwise it would raise a few questions and then they would be prompted to click on the character's article to figure out how they died. First appearance might be silly for single episode characters but then if we change it, people will find it odd that we're not giving the same treatment that we gave other characters.--Gunman6 (talk) 19:54, June 23, 2014 (UTC)

Well I give up the idea of "Only appearance; dies" since there are many corpse-only cases. But I'm in favor of "Single appearance" instead of "First appearance" for those single-episode guys as the latter would be confusing. --William (talk) 06:08, July 10, 2014 (UTC)

The time is never shown to be 11am at the start of this episode, right? I took that to mean that the first scene isn't supposed to be in real-time with the rest of the episode - so therefore this shouldn't start with 11am - Does anyone disagree? --SignorSimon (talk/contribs/email) 18:37, May 9, 2014 (UTC)

What? It only said 11:06 because that's how long had already elapsed. Keep in mind nearly every episode starts at two minutes after the hour because of the recap. I think they did it differently in this one because a tenth of the hour is gone by the time they have the narration. There's nothing to suggest that any time has gone by after the title; Navarro says they "just captured" Jack. --Pyramidhead (talk) 18:44, May 9, 2014 (UTC)

Just a couple of questions since in the past we were very reluctant to name things if they weren't named in-universe within the show:

I'm just asking because I really don't remember if there was a policy change allowing us to be more flexible with names of things. Just wondering. Thief12 (talk) 02:32, May 11, 2014 (UTC)

We've got some situations in the two episodes pages where characters are named where they've not been named on screen. Silent Hunter UK (talk) 20:01, May 11, 2014 (UTC)

Can you give examples? So far we have a list: Margot al-Harazi and Ron Clark's surnames haven't yet, nor Simone's name yet, though they're major characters so odds are they'll be named soon enough. I think we have legitimate (ie non-imdb) sources for all the other characters - who are you thinking of specifically?--Acer4666 (talk) 22:10, May 11, 2014 (UTC)

Looks like there are two Osbornes in two different episodes. They're probably wearing the same clothes, played by the same actor (possibly Andy Wareham), but they're definitely different characters in universe. How should we disambiguate them? --William (talk) 06:06, May 11, 2014 (UTC) 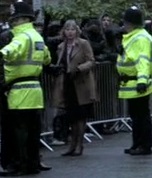 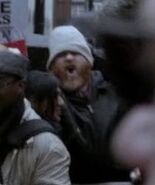 Speaking of the same scene, I've been in contact with George Hewer, another actor who's listed on the IMDb as a "protester". He confirms he was an extra on the show, possibly on this scene (he mentioned Heller exiting a building to get into his car). It's a really tough scene to spot, but I think maybe, just maaaaybe, this one might be him? (the first image is from his website) I'm waiting for him to reply, but I'm looking for thoughts, opinions. Thief12 (talk) 16:55, February 12, 2020 (UTC)

Hewer told me he "might have been wearing a grey coat, possibly a black/grey scarf as well, and I know I definitely wasn’t holding any of the signs." Just in case anyone wants to take the chance to spot him. Thief12 (talk) 20:56, February 13, 2020 (UTC)

Maybe this guy? The guy in front of the purple-hooded guy whose face is only partially seen; his head is right below the exclamation mark. --William (talk) 08:34, February 14, 2020 (UTC)