Back to page
Add topic

HOW EXCELLENT was that! I love these guys! There's not a doubt in my mind they got the list from this project, and I truly think they were tipping their hats to us and also the fans in general. Blue Rook  talk  contribs 04:28, May 14, 2014 (UTC)

Big lad was simone's defender, yeah, played by the stunt guy Paul Howell (they look identical). I believe Caroline Fowlds is one of Alastair Davies' staff, a blond lady in a grey suit visible as Heller enters parliament (see pic here). She had no lines but I suspect she may have a larger part later - and were still waiting on an official name source that isn't imdb. I'm fairly sure there was a female news reporter who had a fair bit of screen time and lines, but seems she wasn't credited--Acer4666 (talk) 00:20, May 14, 2014 (UTC)

Any suggestion for a main picture? I don't think the current one is that good. Considering that a good deal of the episode was spent with the Al-Harazi's, I think something with them could be an alternative, but the current picture does nothing for me, plus it's not of good quality. Another alternative would be something with the chaos outside the Embassy, or with Heller addressing Parliament. Thief12 (talk) 12:55, May 16, 2014 (UTC)

Simone and Naveed talk in her room

Kate and Erik during the riot

I'd like to see more people weigh in, but out of those, I kinda like the Naveed/Margot one (the one with Naveed facing the camera). It's attuned with what I think was the main theme of the episode (getting to know the Al-Harazi's), plus it's clearer, you can see their faces better, and it has a mysterious vibe to it. Thief12 (talk) 17:24, May 16, 2014 (UTC)

He /was/ the Secretary of Defense but not at the time of Days 6, 7 and 8. I doubt he got that position back after Day 8 for a short period of time before running for president. We don't know what position Heller held when he authorised the drone strike. Hell, it's 24, maybe Mitchell Hayworth didn't even become president after Day 8 and somehow it was called for a new election right away or whatever. Anything is possible in the 24 universe considering everything that can happen in only 24 hours. Maybe Heller was just some kind of adviser at the time or who knows.

We could probably answer this better if they told us what kind of political chaos was caused after Allison Taylor resigned and told the truth about everything. The entire administration could've been replaced because the public didn't trust them anymore. 79.223.144.36 16:57, May 20, 2014 (UTC)

But speculation aside (he could well have been the SecDef during days 7 and 8 for all you know), the point being made here is that Heller did not have to be the president in order to authorise a drone strike, right?--Acer4666 (talk) 17:01, May 20, 2014 (UTC)

The following actors are credited as "protesters/protestors" in IMDb. Maybe this can help spot them, if they indeed made the final cut:

Some of them have distinctive features that should make it easier to spot them. Again, I know some of you have extensive conversations around the Wiki trying to identify unknown actors, background extras, and stunt performers, but I go crazy trying to navigate all that X-D so if this was already brought up on another article, just move it. Thief12 (talk) 17:25, February 5, 2020 (UTC) 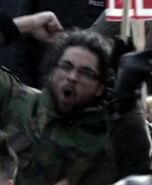 No, as I said I think the second guy is one of Mehmet or Erdo Hurrem. They list "protestor featured with Kiefer Sutherland" as one of their credits and Kiefer pushes the guy down in the episode--Acer4666 (Talk) 17:52, February 7, 2020 (UTC)

Yeah I retracted Bron James because although the camo guy looks a bit like Bron James as he is now, this is a photo of Bron James from ~Nov 2013 (a couple of months before they started filmed LAD) and I think the camo guy seems to have a darker complexion and hair--Acer4666 (Talk) 09:41, February 14, 2020 (UTC)

It's a stunt role where he and Paul Howell got punched by Jack. I think the hairline and general resemblance match with Stuart's. --William (talk) 15:35, February 7, 2020 (UTC)

How about Jefferson King for this Secret Service guy that accompanies Heller to the Parliament? Thief12 (talk) 17:03, February 11, 2020 (UTC)

A comparison shot of both men. Honestly I think they bear some resemblance but the noses seem to be different to me. --William (talk) 04:43, February 12, 2020 (UTC)

Ok, I'm not sure how slippery is this slope, but since we're tackling articles on numerous uncredited background actors and extras, I was about to create an article on Jennifer D. Brown, but then I started thinking... She's not an actress, but a 24 fan that managed to get to Waterloo Station during filming of "Day 9: 1:00pm-2:00pm". She had the chance to hang out with Jon Cassar, Kiefer Sutherland, and others, and shared images of her with them. She also made drawings of several of them which they signed for her.

My doubts is that she's not an actress listed on IMDb and as far as I know, she doesn't work as an actress, which makes me question "when is too much?" As far as potentially creating articles for dozens or even hundreds of extras that might've been barely visible in a blurry scene. On the other hand, we (or I!) just created an article for a barely visible Adil Akram, or a blink-and-you-miss protester, even though the former is barely recognizable in that CCTV shot, and others are barely distinguishable in crowd/riot shots. We also have articles on numerous barely visible extras from Legacy, like King or Clarissa Chaney. Also creating an article doesn't mean we have to create an article on everybody, just those that are "visible" and step up to provide evidence of their appearance? Maybe we can weigh in on some criteria to discern which extras warrant an article? which don't? or should we just leave it alone and wing it as we go through? Thoughts? Thief12 (talk) 16:01, February 17, 2020 (UTC)

I believe the criteria has always been that if someone appears in front of the camera, and we can provide a screenshot and point to them appearing, then they deserve an article. I'm confused about Jennifer D. Brown being described as an extra - did she do any extra work? As far as I can tell she was a passer-by/autograph hunter who went to set to get her pictures signed. Which I don't think warrants an article?--Acer4666 (Talk) 18:31, February 17, 2020 (UTC)

Well, she was on set, is "visible" in front of the camera, and describes herself as an "extra" in another tweet. To what extent does that means she went through a screening process or whatnot, I don't know, but that's the point of my question. How can we differentiate those that are legitimate extras that are selected by a casting agency, or those that just happen to be on location when the show is filming. Thief12 (talk) 23:33, February 17, 2020 (UTC)

Oh, I didn't realise she appeared on the show - in that case, yeah she does deserve an article! Plenty of random cameos happened for all sorts of reasons, and you're right that there's no way we can know how someone ended up in front of the camera - so we can't discriminate based on that - but we can tell whether someone appeared in the episode or not, so that's what we use to dictate who gets an article or not.--Acer4666 (Talk) 12:07, February 22, 2020 (UTC)

I agree with Acer that if someone appears on the show, then that person gets an article here. Seems like Thief is worrying about if we create articles for people that appears in a split second on-screen we may be overwhelmed. Well I think as we won't really be able to track down every person's identity, the number will only be limited to the few who use social media or something like that. Unlike Dan Regan, Richard Clark and others who have professional resume/record as an actor/certified extra, for the case like Jennifer D. Brown, I think we should simply treat her like Clarissa Chaney. We should note her as a background extra and state that her character can be seen running for her life at Waterloo Station in episode X, and maybe put her twitter account in below, end of story.--William (talk) 05:58, February 23, 2020 (UTC)

Yeah, that was pretty much my concern, but I agree that it will be limited to whoever comes forward about being an extra on the show, and as time passes by, it will be harder and harder to find extras of, say, Season 1. Thanks for the replies! Thief12 (talk) 14:09, February 24, 2020 (UTC)