Hm, suppose not. I think I was just in Erik Rondell mode watching that episode. I also was convinced I'd spotted Erik Stabenau, before realising it was Clayton Barber. They look pretty similar--Acer4666 21:45, June 13, 2011 (UTC)

Maybe I'm going mad from all the Erik Rondell spotting. But could this be him from Day 1, one of Harris's mercenaries along with Tony Donno? He certainly has Rondell's trademark left ear--Acer4666 21:25, June 14, 2011 (UTC)

Ah, thank you station7, good to know I'm not completely off (I've been going through so many Erik Rondell maybes and maybe nots I don't really know what's what anymore). We'll see what anyone else thinks.

I thought I'd throw this into the mix too - in the following episode, this henchman appears wearing some sort of ridiculous stuck-on moustache to indicate he's a foreign person. It looks like perhaps the same guy - but I've completely lost sight of what Erik Rondell actually looks like, so I dunno.--Acer4666 23:26, June 14, 2011 (UTC)

I wish I could find more info from google! It seems like his stunts unlimited page is the only thing on the internet that he's done himself. There are four different faces from different parts of the drazen's men scenes (one in the camo shelter which I think was studio based, one running over the field towards the prison, one outside the prison putting Jack into the van [pic above right] and one at Nikola's restaurant [left]). I dunno if any are the same, or if they're all the same or what - I could upload the others to compare--Acer4666 19:20, June 15, 2011 (UTC)

I was comparing the second picture with another official pic of Rondell and based on the nose and cheek width, I'd agree that it is in fact Rondell based on this pic here: http://www.stuntplayers.com/members/RONDELL,ERIK_D.jpeg --Gunman6 (talk) 08:28, December 14, 2012 (UTC)

Umm, okay then. How did you get into email contact with Rondell though? Shouldn't we make this a requirement for other stunt regulars that we're unsure of who they portray prior to adding them (unless it's downright obvious)?--Gunman6 (talk) 16:07, December 14, 2012 (UTC)

That would be a pretty impractical policy to have - many performers don't reply, don't remember, or are unreachable. I can't remember where I found Erik Rondell's e-mail, but to be honest I don't wanna bombard people with more and more e-mails about 24 as it will get tiresome for them and break any goodwill we had with them. I tend to send as few e-mails as possible in order to get the most information I can, but I don't treat the performers as just a never-ending source of information--Acer4666 (talk) 16:42, December 14, 2012 (UTC)

Of course, don't overdo it but I was just thinking to myself today about how there's still going to be a few dead-ends and I'm all for being discreet which is why David Kilde replied back a week later after he wrapped filming two different movies and a TV pilot in Michigan. I recently asked Dorian Kingi if he would be interested in providing specifics on a select few projects as well as other career specifics in a simple paragraphed email.

I know sources are limited and that might hold up a few pages but based on what I'm observing, it just seems to me like there's tons of debates about who-played-who and ambiguous decisions on every other page.--Gunman6 (talk) 00:28, December 15, 2012 (UTC)

If there are decisions that have been made on articles that you think are ambiguous bring them up on the talk page for discussion - I normally only add to the page when I'm pretty certain, and sometimes that comes from having seen a behind the scenes shot or conversed via e-mail, and I don't always mention that in the edit summary. But I'm always happy to debate about any idents people think I have potentially got wrong--Acer4666 (talk) 15:22, December 17, 2012 (UTC)

Alright, understood but please understand that I wasn't doubting you, I was simply reaffirming that it appears like there's far too many incidents where other users are doubting other's findings in general and I was wondering if there was another way to go about this. I have no findings of particular people at this time but I would love to get into contact with Jeff Cadiente as well as interview him in general for an online podcast that's in the works.--Gunman6 (talk) 19:23, December 17, 2012 (UTC)

Oh no, no worries, I was just making a general point that if you see any edits by anyone and you're not sure of whether they're correct or not never hesitate to bring it up on the talk pages. I think the only way we can go about it is to debate and find out the general consensus of opinion. I knew you weren't having a go at me :)
Let me know if you ever get your podcast off the ground - it sounds interesting!--Acer4666 (talk) 21:27, December 17, 2012 (UTC)

I recently resaw the second episode of Day 1 and the driver who's transporting Mandy seems to have the exact same mustache as the "Drazen moustache man."--Gunman6 (talk) 00:23, June 26, 2013 (UTC)

Does anyone know if stunt performer Buddy Joe Hooker might actually be the stuntman who, during Day 1, played Mandy's driver and the "lady tickler" guy? I'm seeing quite a resemblance but don't see anything connecting him to this show nor has he replied to my inquiry via email.--Gunman6 (talk) 19:54, April 25, 2014 (UTC)

Buddy Joe Hooker is a good shout for the moustache man - I thought it could have been Danny Epper but they have different ears. The fact he is a stunts unlimited guy connects him to the show. I don't see the similarity with Mandy's driver that you're talking about - he's blond, and doesn't have a moustache--Acer4666 (talk) 20:13, April 25, 2014 (UTC)

Really? Looked like a stache was visible here and here. Both that and the Drazen guy were filmed later at night and Joe Hooker is blonde in real life it appears.--Gunman6 (talk) 20:32, April 25, 2014 (UTC)

Yes really! There's a picture right here of his face, look. That picture you're linking is a tiny shot of his face, and if you watch the scene you'll see that it's a shadow that passes his face for a split second. It could possibly be Buddy Joe Hooker but I can't be certain - could be a whole load of other people. Where are you getting the fact that he's blond in real life? He's got brown hair in all photos I can find. The Mandy driver may have darker hair that appears lighter in the firelight. BTW the scenes were filmed at completely different times (they're from opposite ends of the season) so the fact they're both night shoots says nothing.--Acer4666 (talk) 00:21, April 26, 2014 (UTC)

Never mind, my view screen's lighting sucks. I'm seeing that he's more brown-colored. Either way, the face bares resemblance. I'm also open to the idea that there are two different people who played Mandy's driver (something that seems to occur a lot for various action-heavy films and television).--Gunman6 (talk) 00:53, April 26, 2014 (UTC)

I think it could be him, especially when compared to the season 7 FBI agent. I'm trying to work out if there's a way to contact him to confirm/deny these roles. Dunno what anyone else thinks about flamethrower terrorist, but I'm happy for it to stay--Acer4666 13:17, September 30, 2011 (UTC)

No offense to you, but you said him to put him there, because of the ears? That's a bit weird. They don't look familair, the flamthrower terrorist and the FBI agent. Absolutely not. --Station7 22:04, September 30, 2011 (UTC)

I haven't managed to find a contact for Erik Rondell to confirm the flamethrower guy - but it's interesting that in the extended version of the motorcade assault, this guy calls him "Erik". I believe that makes him eligible for an article based on the current canon policy--Acer4666 (talk) 15:53, January 7, 2012 (UTC)

Acer if an unnamed character who appears in an episode is given a name in a deleted scene, and it really is the same character, then the name can stick. Is that what's happening? if so, awesome. Blue Rook  talk  contribs 18:54, January 7, 2012 (UTC)

Yeah, the leiutenant tries shooting through the door, then he says "it's bulletproof - Eric!" shouting in one direction, then turns and says "get the van" to another direction, then the flamethrower guy runs from the direction he shouted Eric to, and another guy runs off to get the van. So I'm sure flamethrower guy is called Eric (spelled with a c thanks to the subtitles, but I'm sure the stuntman was just using Erik Rondell's actual first name).
Station7 I've restored the file cos I'm sure there's no better shot of his face. Are you still sure it's not Erik Rondell, despite him being called Erik in-universe? They often use real first names of the actor for minor characters. As I say I always thought the resemblance was there and it was the same stuntman. What does anyone else think?--Acer4666 (talk) 21:08, January 7, 2012 (UTC)

No, I'm still disagreeing that Erik Rondell portrays him. I know that they name characters after actors, but it could just be coicidential. I'm still staying and I disagree. But that's just my meaning. --Station7 06:00, January 12, 2012 (UTC)

I dunno what else to say to convince you, but I'm sure it is. I can't see any specific feature that is different. I've done this montage of flamethrower guy with some established Erik Rondells - here, which I think shows they're almost certainly the same person (especially with the "Eric" name thing as well). Hopefully someone else will weigh in to offer a third opinion.--Acer4666 (talk) 13:25, January 12, 2012 (UTC)

An anon contributor added Rondell to Eric's actor field, and I've made the changes to reflect that. Along with William's support and evidence of the name pointing to it being him, it seems the consensus is that it's Erik Rondell. Station7, if you can give me any specific difference between any of the features of the different faces, I'll be willing to enter into a debate about it, but for now I'll keep things as that he plays Eric.--Acer4666 (talk) 19:43, January 23, 2012 (UTC)

On the right is the driver who Jack shoots in season 2 just before being tased by Ronnie Stark. Having watched the scene frame by frame I'm convinced it is Rondell, despite not seeing him very clearly and this picture obviously doesn't do the comparison justice. I am confident enough to add it here - if anyone disagrees with it being added, please let me know soon!--Acer4666 (talk) 23:07, June 13, 2012 (UTC)

Was comparing the various pictures on Rondell's page and they seemed to be rather similar to this guy here: 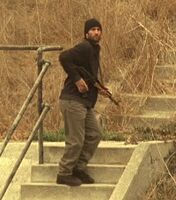 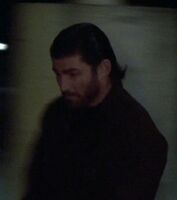 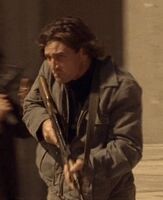 Different costumes, different characters. He probably did so in order to put his long、curly hair into that hat? Since the second character he played in the episode has his usual hair. William (talk) 15:58, May 26, 2015 (UTC)

Oh, right - but the Lock and Load documentary shows a different day of filming to the bits with Kiefer invading the compound (Kiefer wasn't there during the Lock and Load day, it was just the marine bits).
It could be Rondell but I'm unsure of it, I will e-mail him and see if he responds--Acer4666 (talk) 19:03, May 26, 2015 (UTC)

It could easily be him or any of the other long-haired performers given how common it is to play numerous roles, even in the same episode. Given how he had long hair which remained untouched, it could easily be him but the angle is what's mainly troublesome for getting a decent determination.--Gunman6 (talk) 21:40, June 1, 2015 (UTC)

I think whoever played the first sentry also played Marwan's getaway driver in Day 4: 4:00am-5:00am, but I'm unsure whether it's Rondell mainly due to the beard and hair color. A photo of Rondell in basically the same posture as the driver for comparison. --William (talk) 06:27, July 23, 2019 (UTC)

Retrieved from "https://24.fandom.com/wiki/Talk:Erik_Rondell?oldid=340361"
Community content is available under CC-BY-SA unless otherwise noted.