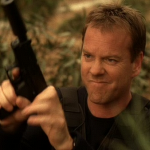 I'm Phillip and I enjoy adding images of Jack's weapons, as well as American military, CTU, FBI, Customs, and Secret Service personnel. Check out the videos at the bottom. They're hilarious.

Massive 24 fan and love this wiki. Most of my edits are including pics on military/CTU/FBI personnel and Jack's weapons. I live in a Mobile Underground Detention and Detainment facility in Saugus, a secure, undisclosed(well, it's at 21911 Kipling Avenue) location guarded by La Bamba. I'm a native German, but live in America; it may interest you to know that "Bauer" means "farmer" in German.

Stuff I do Edit

Me and 24(The Bauer Power Hour) Edit

I had seen 24 on commercials and stuff, but I thought it was just another TV show. Due to my reputation as a military history buff and special operations forces enthusiast, my eighth-grade history teacher recommended it.I first saw 24 as the last couple of episodes of Season 8 on Hulu, but it was annoying as hell, since it was only the last six episodes and I had NO idea what was going on. That was in summer 2010, when I was 15.Since then, I've seen the first two seasons. I decided to skip Season 3 and watched all four episodes of Season 4 in one day on Feb. 10, 2012 from Netflix. Starts off pretty good,eh? Best show ever.A military history buff and special operations forces enthusiast, I was disappointed by the quality and quantity of pics on my favorite pages,as seen below. I don't know how to get screenshots, so most of my pics are from http://www.imfdb.org/wiki/24. I didn't know crap about posting pics and the image policy, so I annoyed lots of professional editors(Acer4666, Blue Rook, and Thief12, a.k.a. the Category Police) and they annoyed me. Eventually, however, I learned the ropes and hope to make some meaningful contributions.

Other series I enjoy

My favorite pages on Wiki 24 Edit

I am fascinated by special operations forces and their operations. Thank you for creating this category:http://24.wikia.com/wiki/Category:Special_Operations

He sure got a lot done from a yacht.

He and Crimson Jihad sure got lots of stuff done in 24 hours.

Pretty sharp guy, convincing arguments that put him at odds with David Palmer's rhetorical idealism. Unbeknownst to Palmer, his evil Cabinet is plotting to depose him, and in an instant the quiet guy we keep confusing with the Turtle Guy from The Master of Disguise shoves Lynne Kresge down a stairwell.

Oh, yeah, that's what that guy's name was. All-around badass. Seems to be a conservative to most liberal critics of 24, but the show cleverly portrays him as a sort of gray area in that respect. Also, he has a badass voice, and plays Kiefer Sutherland in real life.Imagine, if you will, that Jack is easily over-powered by a single bad guy, thrown down the stairs and cracks a rib. Sure, and a bears sh*ts in the bathroom and the ocean holds back New Orleans. Jack might be immune to Kryptonyte, but he is a lame duck for 24's dumb-as* screen writers, who love to trip up his best-laid plans.

Very sharp guy, excellent job defusing the Ferralgamo scandal as well as the "warmongers" in his Cabinet.

He's just funny. Seemed like an obstructive, humorless bureaucrat in the beginning of Season 1, but that's not really true.

Sharp, serious guy. Always in time to save someone's ass.

Whispers "Yeah" and "Allright" a lot.

While field agents were running around LA having gun battles with terrorists, Edgar sat around CTU being bald, fat, and talking with a stupid lisp. Good thing in Season 4, when he prevents 103 nuclear reactors from melting down...EXCEPT ONE, IDIOT!But then he overdosed on nerve gas. He wrote Chloe a 24-page love poem every day but always ate them because he was too shy.

vs. Marcus, a hapless hillbilly.

This is so funny. I love this scene for its hilariously anticlimactic nature.

Dana White:"So what? You're in my house."

Jack Bauer: You have no idea how far I'm willing to go to acquire your cooperation."

Bill Buchanan to Chloe O'Brian:"We're in an active code, Chloe. We don't have time for your personality disorder."

Jack Bauer to Charles Logan:"the only reason you're still conscious is because i don't want to carry you."

.CTU Los Angeles Hidden by an amazing feat of camouflage, the building also houses an underground parking garage as well as elevators, for some reason.

"My knee-cap!"-everyone on jack Bauer after meeting him for the first time.

"This guy's killed a sh*tload of people"-Captain Understatement on Jack Bauer.

Retrieved from "https://24.fandom.com/wiki/User:BauerPhillip24?oldid=315729"
Community content is available under CC-BY-SA unless otherwise noted.