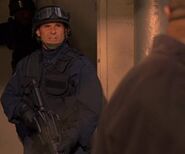 Witt- An interesting CTU TAC team member in that he often is the most reliable TAC team member following Curtis and Jack; later replaced by Jesse Collier since they couldn't find another performer 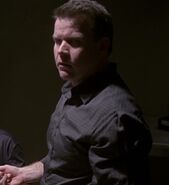 Adam Kaufman- Played rather expertly by then-newcomer Zachary Quinto, this smart yet sometimes unpleasant character manages to be rather well-layered in how he can't stand both his superiors and newcomers (Chloe O'Brian, Kim Bauer) acting up and not staying focused. It often takes a few compliments from other peers or a simple reassurance by either Tony or Michelle to gain his confidence back. It would've been interesting if he had returned but alas that might've resulted in the unneeded melodrama between the likes of people such as Sarah Gavin or Edgar Stiles.

John Quinn- A recurring villain who could've easily pulled a Vladimir Bierko as one of the main guys truly pulling the strings but since the writers felt they had already fooled us enough, he serves as a simple yet rather effective adversary to Jack Bauer. His final fight sequence and established marksmanship background manage to make up for the lack of screen time allowed for him since his initial appearance in the Redemption telefilm. Sure, he's no Ira Gaines but he's easily second-in-line in terms of a no-nonsense creep who can kill without hesitation at the end of the day just for an enormous paycheck. It might've been far more interesting if he had taken the place of the Alan Tanner character, minus the getting caught by FBI authorities and tortured by Renee Walker of course, and then reemerged later to make Bauer's life far more hellish but, again, that's wishful thinking. 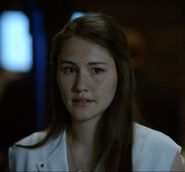 Mariana- Played by Christina Chong (and not meant to be mistaken for Christina Chang), this CIA worker ends up much like all the others being just as simple a worker as the CTU workers, yet because they claim it to be a different federal spying organization, we are forced to take it with a grain of salt.

Anne Packard- This character ends up being one of most unusually vital guest-stars. Like many of the show's half-season featured characters, this person makes sure to leave an impact by showing that President David Palmer could've had another chance at a relationship and yet it's going to be one of many things that ruin his current year in office and getting reelected.

President John Keeler- Despite having a short-lived presidency, Keeler ends up being rather notable as he has to deal with peace treaties, supervising the rescue of SoD James Heller and keep receiving other relevant updates from his cabinet on-board Air Force One. This feels like the writers truly tried to ape The West Wing by mirroring so many notable real-life issues that the likes of Jimmy Carter, Ronald Reagan and Bill Clinton encountered at some point in their respective administrations. Keeler was shown previously as a man willing to expose David Palmer's well-meaning but clearly scandalous actions during his term of office and is finally given a fresh look at as also being a rather respectable family man and well-spoken soul. He ends up having rather patient and quiet demeanor as well while considering all the options has has available to use at his disposal but is never quick to act, not because he's afraid per say or wimping out but mainly because he likes to proceed with caution while trying to never bend the Constitution. 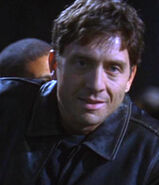 Ronnie Lobell- One of the most unlikeable characters on the show ends up being one of the most unusual two-episode featured characters in that not only is this man a key part of the season premiere set-up but an unusual opposition for Jack. This man doesn't just differ on strategies, as right-and-wrong or even necessarily as a foil. Instead, this man is restricted to taking some of Jack's advice, then carrying out dangerous tasks effortlessly, then trying to be friendly to Jack (when else has any other CTU wise-ass bothered to be on someone else's level?) and then tries to assert himself in the chase that gets him killed and ends up making Jack's day all the more hellish. 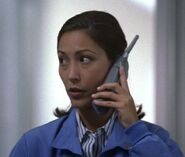 Dr. Sunny Macer- Another underused character on the show (granted possibly due to the actresse's schedule filming another show known only as CSI: Miami) and one of the few to end up appearing in both S3 and S7. Macer I sincerely believe would've made for an interesting romantic interest for Jack at some point but to be fair, that would've been too out of the blue and distracted from far more interesting material on the show, especially since she never really spends time helping Bauer until her final season appearance. I don't know if it's the performer being so well-versed with this role, the writing or a mixture of both but this character ends up asserting so much confidence into Jack's lousy situation unlike most characters, who often stated the obvious or couldn't help but feel sad for Bauer and do little else.

Milo Pressman- One of the few characters to appear in the first and sixth incarnation of the series and rather useful despite limited screen time. While he's first seen just assisting Nina and Tony while helping track Jack's location, he unexpectedly ends up filling the gap originally meant for Almeida himself during his second and final season appearance. Does he do as great a job? Let's just say it's a mixture of "Yes" and "No" respectively. Yes, he's no Tony but, yes, he does earn his keep and do much of the same productivity required for Tony's status on the show even if he too ends up in a romantic triangle. Damn shame that the underrated actor asked to be killed off at the time; after all the cancelled shows he appeared on, I think he should've hung in there a tad longer so that he could be seen in a later season but then again, he probably wouldn't had been used anyway or restricted to a smaller status that later went to Morris.

Ira Gaines- This character ends up being one of the better supporting villains, not just due to him being one of the first main oppositions on the show per say but due to being very aware of his surroundings and having a back-up plan for every other action taken that wasn't in the playing cards originally. Again, it feels like both an appropriate casting and well-recreated mixture, and once this antagonist gets screwed over by the Drazens, he ends up becoming another plausible villain by being much akin to typical criminal behavior in that it's either he meet his maker or get away scot-free.

Brad Hammond- Another unlikeable yet interesting recurring CTU character from the earlier seasons. This gritty character manages to be another right-wing gov't supervisor while also getting across the point that he doesn't like it when things get out-of-line under his watch. Very well portrayed and delivered by this character actor.

Marianne Taylor- Another sexy bitch on the show who spells nothing but trouble. Played to perfection by comedic actress Aisha Tyler, this role and her gig on "CSI" helped stretch her various talents and makes for one hell of a traitor on the fourth season's various subplots. It's easy to see why Curtis fell victim to her advantages as well as why he made damn sure not to be taken advantage of a second go-around.

Mark DeSalvo- Maybe it was just cool to see Lou Diamond Phillips in another cool television role at the time, maybe it was even better because this was a Young Guns/Renegades reunion but whatever the case, this underground security officer comes to life due to instantly becoming involved with Jack's mission, which is keeping Drazen from reuniting with his kin and various mercs. It's a fun role clearly for the actor and he unfortunately doesn't make it to the end of his respective season.

Unnamed CTU Employee- Much like the various Star Trek background performers, a regular viewer's sharp eyes start to eventually make out familiar faces and this character played by Dana Bunch isn't any exception. He ends up appearing in the first five seasons, sometimes even in key segments and then disappears after Season 6 begins for unknown reasons.

Omar- Unlike many other people involved with Marwan and Navi Araz's plans for the various Day 4 attacks, Omar notably stands out due to being well-cast, having plenty to do in terms of his devious plans for the beginning of the day and never miscalculates. There is not one moment where you feel that he's made a humongous mistake. Sure, Marwan had his various escape routes but when nothing else goes according to plan, all he tends to do is flee, plus, Navi has his family getting in the way of his missions. This guy has nothing holding him back until the show's main protagonist manages to track down the area location.
Add a photo to this gallery

3x03 CTU ext.jpg|Brian Pierson- This character is rather underused in terms of actual screen time but is still given plenty to do such as keep a hold on prisoners and walk with the principle characters for the second and third season.

Retrieved from "https://24.fandom.com/wiki/User_blog:Gunman6/Recurring_characters_on_the_show?oldid=290918"
Community content is available under CC-BY-SA unless otherwise noted.