Al Sapienza, one of the most notable TV show villains to date who's since gone on to find work on "Persons of Interest" and "House of Cards" has one of the most unusual detective roles on this show in addition to having one of the show's most gruesome death scenes 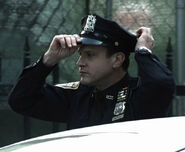 Chris Caldovino is apparently a member of Phil Leotardo's crew but much like his Sopranos appearances, I don't necessarily find him notable. This isn't saying he's an incapable actor just that neither this or his 24 role give him much to do, thus, not making him really memorable outside of a random IMDb keyword search 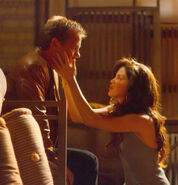 Vanessa Ferlito played a gorgeous but troublesome money embezzler known only as Tina. She gets her shop later torched and is presumably either killed or on the run. Here on the show, she plays a notable former flame of Jack's who despite her relation to the Salazar cartels is actually rather sweet to be around once you get to know her.

John Eddins played a key mentioned and briefly seen figure in one of the earlier Sopranos episodes. Who can forget his gunfight with Tony Soprano fleeing for his life?

That's right, the one "That Guy" who betrayed Jack also had plenty of sinful action to display on Sopranos 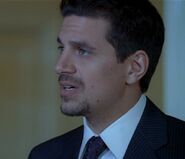 Andy Davoli apparently was one of the guys who tried and failed big time at robbing Christopher; this actor is more prominently seen in the 2001 action-crime comedy Knockaround Guys

Edoardo Ballerini- always a convincingly freaky actor who often plays creeps or anti-heroes in the wrong place at the wrong time; this actor is fortunately finding more solid TV and indie film work

Frank John Hughes- While I mainly noticed him for films such as Bad Boys and shows like Band of Brothers, he also apparently was one of the many other rival gang members aiming for Tony's comeuppance in the final season.

Louis Lombardi- an already underrated character actor; Louis was previously mainly recognized as the FBI agent running Big Pussy's sting operation which didn't go so well considering that Tony's a pro at ratting out snitches; Lombardi thankfully became better recognized since his 24 role and still remains a fan favorite to this very day
Add a photo to this gallery
Retrieved from "https://24.fandom.com/wiki/User_blog:Gunman6/Sopranos_Actors_on_%2224%22?oldid=285573"
Community content is available under CC-BY-SA unless otherwise noted.