In this blog post, I'm going to be having a look at some of the "mysteries"/uncertainties regarding the field agents in 24 - such as continuity errors, background performers, etc etc.

This operation was an interesting one. Everyone knows Michelle and Gael were part of this operation, but what about the other agents?

To start off with, we see them pull up to the hotel at about 3:53am. Getting out of the cars are Brian Pierson, Peterson, the "Division agent" - plus four other unnamed agents. 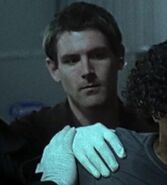 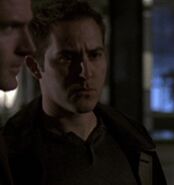 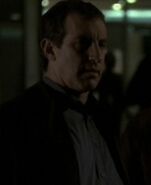 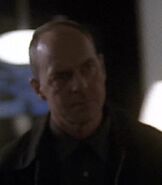 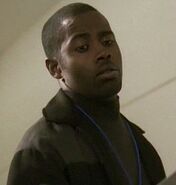 The agents can be seen getting out of the car. When you look closely, strangely in the first shot as Michelle speaks with Craig Phillips it seems you can perhaps see agent Peterson twice - opening the boot of the SUV and walking in the opposite direction - it's hard to tell who is who from here. Also in the shot are: Pierson, who walks over to the car, whilst the tall African-American agent and the older looking agent are also there. The agents then begin preparing.

After Phillips mentions the hazmat suits to Michelle, the tall African-American agent, the female agent, the Asian agent and Peterson can be seen conversing by the car. Gael and the division agent exit the other car as Gael mentions to Michelle Alvers is in the hotel, whilst Pierson and the older agent are discussing something.

As she walks up to the hotel, Peterson goes to the boot to get some of the equipment out. Gael looks around and follows her, then Peterson and Pierson. The Asian agent can then be seen walking up, as the Division agent hesitates. As they come up to the door, the older agent can be seen too. The agents enter as Pierson holds the door open for them.

Gael directs the older agent to one side, as Peterson walks a little bit behind Michelle. The division agent can be heard saying "Just set up right over there" to the African-American agent as Pierson closes the door. All nine of the agents, including Gael and Michelle have entered. The order they entered in is as follows: Michelle, Gael, Peterson, older agent, Asian agent, female agent, Division agent, African-American agent, Pierson. This leads to the first main continuity error regarding these agents - when Michelle phones Tony Almeida just after 4am, she mentions there's only seven other agents including Gael, when there is actually eight.

In the next episode, we see these agents again. Their main orders/scenes are as follows:

The African-American agent is seen briefly in a couple of scenes in the background throughout the episode, and later reappears guarding the door alongside the Division agent. The Division agent has another line trying to reassure Danny, who after trying to escape is shot and killed by Michelle. The African-American agent and the older agent can be seen covering up his body.

In the next episode, Peterson is still guarding Alvers but the other agents are rarely seen. Pierson can be seen briefly talking to a woman on the reception desk, before lining up to be tested alongside the Asian agent. The African-American agent and the older agent are still with Danny's body and the latter turns away Danny's female accomplice who starts making a scene. The female agent can be seen in the crowd briefly. Only the Division agent does not appear, so it is possible he started showing symptoms.

My theory is, as the Division agent was shown hesitating to follow the agents in, he was still working for Division on Day 3 and was perhaps only there as a liaison/just for extra support for Michelle and Gael. He may have been a last minute addition to the team or something similar and therefore was nervous to go in. Sadly it seems he was the first agent to show symptoms as he does not appear again after 5am, as strangely he was guarding the door just before Danny tried to escape, and does not appear in the first scene of the next episode.

The rest of the agents appear in 5am-6am, and it seems like at the end just Michelle and the African-American agent remain. I'll have to rewatch 7am-8am's hotel scenes but I can't remember seeing anyone else. My guess is that everyone else unfortunately started showing symptoms and were quarantined with the rest of the infected hotel guests and staff. Sadly, the other agent was guaranteed to be infected as per his test results, therefore making him the only "confirmed" death other than Gael, given that the rest of the agents weren't shown to die/receive their test results on screen.

There's also a second possible continuity error. Ed Miller appears in 6am-7am, which doesn't make sense as he's seen without a hazmat suit. He wasn't a member of the initial advance team, and is shown in just plain clothes which would be strange as the Hazmat teams had already arrived. A possible explanation could be that he was originally supposed to be part of the original group of agents that entered the hotel but may not have been available for filming. Which wouldn't make sense really, given there was 7 other agents who could have had his minor part instead, and if he was signed on to have a role this series he could've appeared in following episodes.

Retrieved from "https://24.fandom.com/wiki/User_blog:LeeCastle24/Field_agent_mysteries?oldid=344393"
Community content is available under CC-BY-SA unless otherwise noted.