So, I've been re-watching ye olde Season 1 recently, and I was about halfway through Episode 6 when I noticed a little touch that actually made me go back and re-watch that scene several times. If you don't know what I'm talking about, I encourage you to go back and re-watch that episode yourself. Without giving it away, it occurs about 19 minutes in and involves the most diabolically clever use of a split screen I've ever seen.

Done? Still don't know what the hell I'm talking about? Well, while on the phone with Nina, a slightly annoyed Jack asks for an update on the goings on at CTU. After which, Nina glances over her shoulder at the body of a certain accountant from the Valley; at the same time, we can also see Jack—for no apparent reason—eyeballing Teri's new friend, Alan McNotYork. 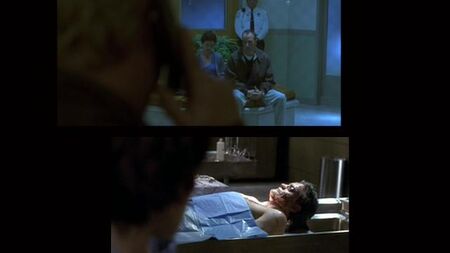 So was this a deliberate attempt at foreshadowing by the 24 producers, hinting at a possible connection between those two men, or am I just reading into this too much? If it's the former, kudos to them, and I'll definitely be keeping an eye out for similar touches from now on!

Retrieved from "https://24.fandom.com/wiki/User_blog:Nitromancer/Am_I_insane_or_not%3F?oldid=288425"
Community content is available under CC-BY-SA unless otherwise noted.