I'm pretty sure one of the two blond inmates who got blown up is Erik Stabenau, but I can't really see the face of the other guy. I think it's likely this guy, who's the only other blond inmate in the crowd, taking over the role from Troy Gilbert who went on playing the SWAT guy. Looks like Keith Campbell.

Also do you think there is any stunt work involved in the Kyle/Linda hanging scene? --William (talk)

Could that guy be Tony Angelotti? He listed Greg Barnett as 24 co-ordinator on a resume according to User:ThomasHL's page. I'm not sure it's Keith Campbell.
I imagine there could have been stunt people in the hanging scene, but not sure. In the audio commentary Riley Smith talks about how he was in a harness for the scene, so he at least did some of the stunt bits himself--Acer4666 (Talk) 22:55, April 19, 2020 (UTC)

Looks like Angelotti to me, good job! As for Kyle and Linda, the action looks pretty real so I can't really tell whether there are any stunt doubles in both close-up and long shot. So I'd just leave it as it is. --William (talk) 07:05, April 20, 2020 (UTC)

Surely the two inmates blown up by the explosive were Troy Gilbert and Erik Stabenau? Angelotti's hair doesn't look light enough to me. Troy Gilbert was definitely dressed in inmate's clothes on the second day of shooting after the wall was blown up, as can be seen in 24: On the Loose. He presumably changed to play a riot guard at some point during the day (it seems they were pretty short on stunt performers that day according to the documentary!!)--Acer4666 (Talk) 09:54, April 20, 2020 (UTC)

This is one of the inmates who gets blown up. Though we can't really make out his hair given the dim light he does bear resemblance to Gilbert. So basically Gilbert just blows up himself XD. I thought it's Angelotti because he was present with Erik right before the breach-in scene but since it's a different day so he could be absent either. So maybe Angelotti didn't really do much stunt work?

Yeah I think his really baggy shirt, buttoned once at the bottom, matches Troy Gilbert in OTL. Also, doesn't mean much but I find Troy Gilbert really over-exaggerates his movements when performing which seems to match the movements of that guy.

I think all of the initial chaos was shot as seen in OTL, and there were no SWAT performers present for those shots. The initial shots of the SWAT coming in and chucking the grenades was shot on studio (in the big hole, as the location hole was too small). Then once it calms down and the gunfight happens, this was shot later on location, with three inmates and three (?) SWAT guys plus Chase. I guess some of the inmates from the first location shooting changed into SWAT people for the later scenes.
I guess the guy with Ando could be a stunt performer. I thought the guy on the left in this pic looked a little bit like Matt Taylor but not sure his hair matches Taylor from On The Loose--Acer4666 (Talk) 10:39, April 20, 2020 (UTC)

In this shot you can see all the inmates in the room and the guy on the left of the above pic is not among them. So I think this guy is specifically inserted there and is probably the man who got shot. However I doubt it's Matt Taylor as he looks quite different to the [[File:OTL Matt Taylor.jpg|OTL appearance]. --William (talk) 11:16, April 20, 2020 (UTC)

I disagree - watching it frame by frame, it looks like Meier's mouth and nose. Quite hard to say definitively, but looks quite a lot like Meier to me. For whatever it's worth, both Meier and Stabenau appear together in the next scene as the two inmates who grab Ramon from behind (Gilbert also in the scene, but Meier and Stabenau seem to come as a pair)--Acer4666 (Talk) 21:43, May 20, 2019 (UTC) 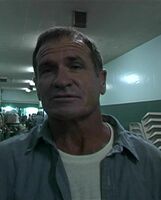 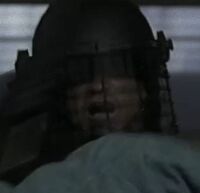 I think Meier's nose is bigger than the riot guard's. I'm comparing the Gilbert's above Saugus guard pic with the riot guard and I think they have similar noses. --William (talk) 04:42, May 21, 2019 (UTC)

Retrieved from "https://24.fandom.com/wiki/User_talk:Acer4666/Season_3_stunts?oldid=343804"
Community content is available under CC-BY-SA unless otherwise noted.