Has been a month, good to see ya again :) Can you link me the spoiler-containing interview that mentions that new Mandy-related info? I'm not questioning it, but rather I'm one of those people who freely absorbs all 24 information (regardless of spoilers). Also I'd like to thank you for not sourcing it in the edit history, very thoughtful of you. Blue Rook  talk  contribs 20:26, 29 July 2009 (UTC)

Heh, was working on the audio commentary page but that kinda came to a halt as I lent someone my DVD sets so they could catch up on the series over the summer before the new season begins. I just sent you an email through the wiki containing the interview link. SeanPM 00:46, 30 July 2009 (UTC)

Thank you kindly! What a good read. The spoilers are of the "introductory/teaser" sort, not many plot arcs spoiled in there which is pretty cool. Blue Rook  talk  contribs 01:15, 30 July 2009 (UTC)

Questioning the source is fine, but why do you think the info is unnecessary, Sk84life? Assuming the information comes from a legitimate source, it's an interesting and insightful bit of history into the creation of the characters. --proudhug 16:32, 2 May 2009 (UTC)

They're sometimes posted to various site including EW.com. I don't see what's wrong with it, I find it interesting to see what the producers had in mind when casting certain characters. I think the creation of a character deserves to be listed in the background information section. SeanPM 18:05, 2 May 2009 (UTC)

They're much more interesting and useful than those damn "Chloe O'Brian is the sixth tallest main guest star whose last name begins with a vowel to be killed off during an odd numbered episode in March"-type notes. --proudhug 18:58, 2 May 2009 (UTC)

After looking around, I'm pretty sure you were the first contributor to add the list of names that was on Dubaku's file. I'm going to be disambiguating all those pages soon, and I'd like to do them all, which means I'm looking for an image or two that has the largest selection of names visible. Seeing that you had access to more names than is available on the current version of File:Chloe-del-burnett.jpg, might you be able to type/upload an image with the larger selection of conspirators? Blue Rook  talk  contribs 20:19, 29 April 2009 (UTC)

Here is another shot File:DubakuList.jpg of the top of the list. The rest of it continues in that screenshot (Chloe-del-burnett.jpg). It's from the first ten or so minutes of Day 7 6:00pm-7:00pm (when Jack is talking to Chloe and asking her to delete Burnett's name off the list) if you need to verify it. SeanPM 18:05, 2 May 2009 (UTC)

Sorry about that, I saw other people editing the page too and assumed it was okay to add something to the background notes section. Won't touch the page again while that template is on there. --SeanPM 03:19, 2 April 2009 (UTC)

Yup, that's me. I got fed up with a certain user who was/is a complete control freak that doesn't seem to do much beside erase everyone else's contributions (I'm sure you know who I'm talking about). Just felt like a huge waste of time contributing and finding sources etc only to have the page end up merged into a single sentence. Anyway, it's nice to see a familiar face around here. :) SeanPM 13:44, 20 January 2009 (UTC)

I don't know how you're getting those replacement images, but they're excellent. They're not just colossal improvements of the original uploads, but great quality unto themselves. Do you have some trick you're willing to share? Blue Rook  talk  contribs 10:40, 16 January 2009 (UTC)

Thanks. :) There really isn't any trick, I just have the high-definition capture of the show (which is 720p meaning 1280x720 resolution). Then I play the video in a program called VLC Media Player and use a keyboard shortcut to take screen-captures which outputs in PNG format on my desktop. From there I just convert to jpg and crop/resize them and upload. I don't know if I could replace those split-screen ones though since on mine it has the "TV 14 DSLV" logo in the top left, and I'm not quite sure on the rules about watermarks and stuff like that. SeanPM 10:56, 16 January 2009 (UTC)

That kind of hard work is what I love. You have a great system together there. Out of curiosity, is this hi-def version of the episodes available somewhere online? (I'll understand if you'd rather not say.) Blue Rook  talk  contribs 11:44, 16 January 2009 (UTC)

Yeah I can help you get them. Two things you should be aware of first, the files are 1.09GB each so you probably want a high-speed connection to download them, and also you'd need a decent computer to play them back. I've sent you an email through Wikia with more details. SeanPM 12:38, 16 January 2009 (UTC)

Hey, I removed the image you posted of Brannon Braga, as it's not from an official 24 source. Currently, we only accept crew photos that come from DVD special features or other specifically 24-related sources. Check out this thread in the Situation Room for the original discussion, and of course our Image use policy for more information. --Proudhug 18:02, 14 January 2009 (UTC)

Hey, Sean! It's always great to have experienced wiki editors join our crew. I hope you like it here and stick around.

To answer your question about goofs, yes, they're perfectly acceptable to include in the BG section of pages. Personally, I'd prefer people don't go overboard with listing errors, especially of the type that can be open for interpretation, but blatant plot or continuity errors are always interesting and noteworthy.

I'd like to add a second welcome as well SeanPM. You've done excellent work fleshing out the article for Morgan and your images are perfect! If there is any advice, I'd recommend typing "{{Fairuse}}" right when you upload each image you got from the show. But that's a minor thing and someone else will always get to it if you forget. Again, nice work, and happy editing! Blue Rook  talk  contribs 18:13, 13 January 2009 (UTC)

Thanks for the welcome guys. It's nice to join such a friendly environment. I might have more questions later but I'll make sure to remember to add the {{Fairuse}} tag to my images for now on. Thanks again! SeanPM 18:59, 13 January 2009 (UTC)

Sean, I was wondering if you could get some screencaps of the cabal members shown onscreen? I have no idea where everyone else is getting screencaps, but I can't find them anywhere, and I know you take some.

Just took a few. Unfortunately, the way in which that scene was filmed (as creepy and mysterious as it was) doesn't really translate well to screencaps. The director intentionally covered half their faces with either shadows or having them sit behind objects to keep the mysterious vibe, so these are the best possible shots I think (click for bigger). 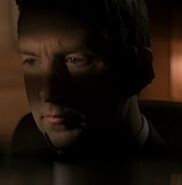 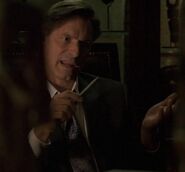 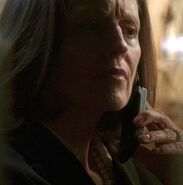 Add a photo to this gallery
In order they are: character "Mr. O'Neil" played by actor Jim Staples (#3), actor Nicholas Guest as "#4", actress Jennifer Hetrick as "#5". One other older guy shows up towards the end of that scene but it's so close-up that all you could see is his chin and lips (and they don't reveal which "number" he is leaving no way to classify him). Hope this helps and if there's any other screencaps you need just let me know. --SeanPM 03:27, 29 April 2009 (UTC)

The older guy you mention is actually still Nicholas Guest, just another angle. If you look really closely I'm very confident that you guys will agree (check the nose and the unique vertical skin indentation between his eyes). His voice is also the same, and the opinions he expresses are consistent too. Blue Rook  talk  contribs 18:49, 29 April 2009 (UTC)

I hadn't read this talk page until now so I didn't know there were already some pictures of the cabal members uploaded already. Since I uploaded similar pics after you, I suppose they can be deleted and replaced with this ones. My apologies. Thief12 18:56, 29 April 2009 (UTC)

Sean I hope you don't mind: I swapped out two of yours with two of Thief's, and then cropped the third (of Cabal #4) that you uploaded to get rid of the "Fox" logo. I can explain more, but if you don't care either way I won't bother. Sean do you agree that the "older guy" is actually just N. Guest? Blue Rook  talk  contribs 21:37, 29 April 2009 (UTC)

That's fine, I had just quickly made full screencaps before going to sleep. Thief's images were better since the people were cropped out. And yes after watching it again, I agree that it's the same guy (Nicholas Guest) at a different angle. SeanPM 03:53, 30 April 2009 (UTC)

I noticed after finishing my episode guide that you edited it while I was writing it. I don't think your edit saved, as I was almost completely done with the episode at that point. You might want to re-edit it in. Sorry.    Willo    talk    contribs    email   06:30, 19 May 2009 (UTC)

It's completely my fault, I scrolled right to the bottom of the page (since i was just adding a background note) and missed the inuse template until after I submitted. Thanks for the heads up, I'll re-add it now. Great work on the episode guide by the way. SeanPM 06:42, 19 May 2009 (UTC)

Retrieved from "https://24.fandom.com/wiki/User_talk:SeanPM?oldid=127809"
Community content is available under CC-BY-SA unless otherwise noted.